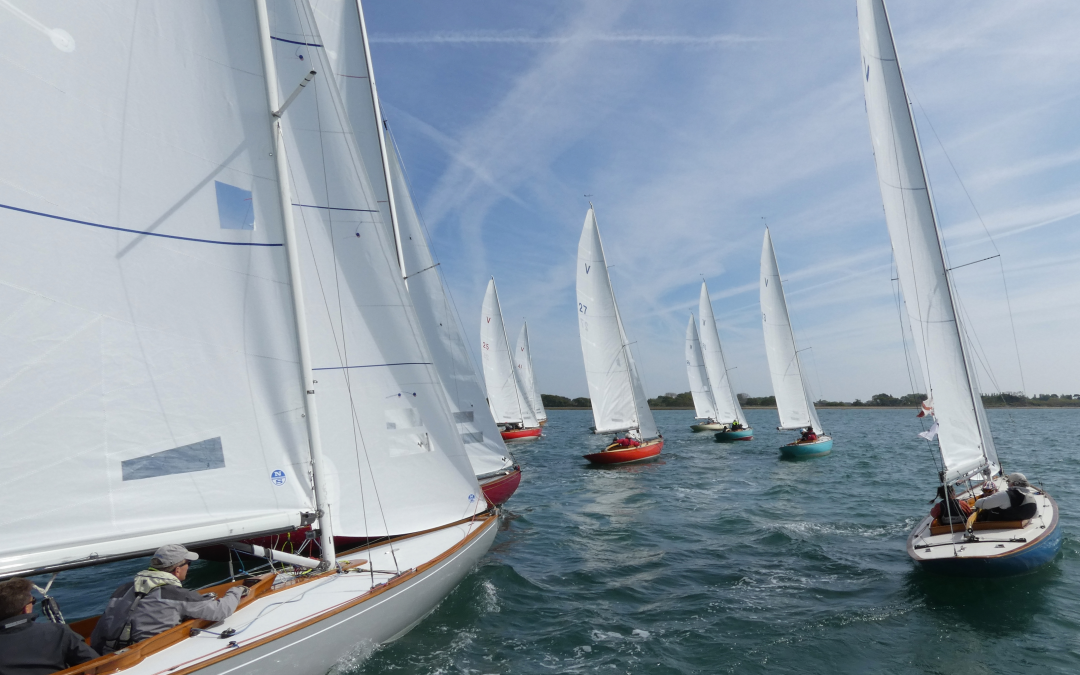 The Henry Chisholm weekend is traditionally held over the first May Bank Holiday and 2022 saw a return to normal business with 19 Sunbeams on the water for our first major trophy of the year. On Saturday morning, possibly due to watching the Swallow fleet start under a black flag, the Sunbeams were well-behaved and away on their first attempt in a South Westerly breeze which had taken some time to fill in. Bright sunshine and cotton wool clouds over the South Downs confirmed this was a sea breeze that was now in control over the gradient Easterly that had taken the fleet from their mooring and then left them to their own devices for half an hour. The patience of the fleet and the PRO were rewarded with a short sharp race that had a windward mark at Ellanore. The fleet was well spread across the line at the start with Fleury leading the fleet, closely followed by Holly, Betty, Argosy and Kitty. Danny had started further down the line and tacked across just behind the leading group. Fleury tacked to cover Danny and Holly, leaving Betty to continue on starboard into the shallows on the Eastern side of the harbour. A lucky header allowed Betty to tack and clear the leading group and continue into Ellanore on a slight lift, rounding the mark to head for the zone mark (Tern) situated just to the South of the port hand goal post. Holly and Fleury had a bit of match racing on this leg, allowing Danny and Betty to gain slightly on the downwind leg. A beat back to East Head with the all-important Pilsey Post to be rounded correctly, saw Danny pass Betty to take the lead which she held to the shortened course finish at Park. The fleet then battled the tide home for a quick lunch prior to the afternoon race. 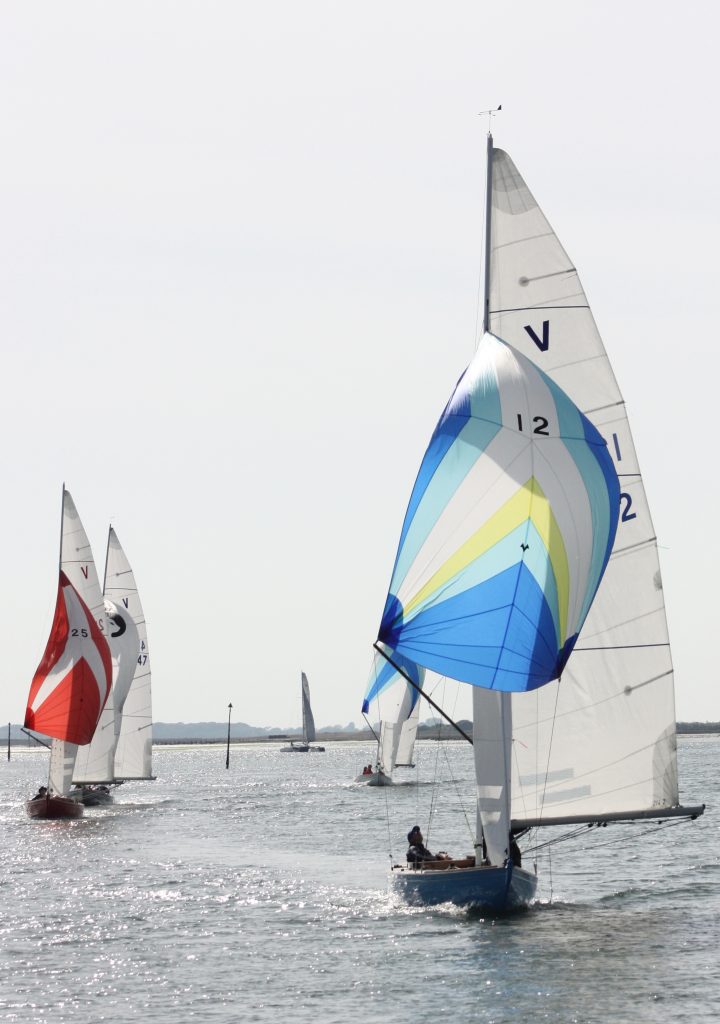 The afternoon start was postponed for about twenty minutes to allow Swallows and Sunbeams to get down to the start near Park. This time the Swallows were away on their first attempt, but the Sunbeam fleet blotted their copybook by being too keen on the ebb tide, with most of the fleet over the line at the start. Recognising the normal good manners of the fleet, the PRO did not run the second start under any sort of onerous arrangements, and although there was some doubt as to the true state of affairs, the PRO let the fleet go on its second attempt. The first leg saw a lot of position changing, with both Alchemy (more later) Molly and Bryony amongst the front runners, with Argosy leading the fleet on its tide-assisted way up to Dunes. Sky worked her way through the fleet to round Dunes a boat length behind Argosy. The next mark from Dunes was Peacock, which was dead downwind and caused a pile up of boats at Dunes as the combination of tide and wind shadow caused a melee to form involving a large part of the fleet. With the strong Ebb tide Argosy managed to avoid the main fleet arrival but Sky was not as lucky and rapidly went from 2nd to 13th after avoiding action and turns left her on the winner bank for a few minutes (note to Race management: Dunes an inappropriate windward mark if returning up harbour on an ebb). Argosy managed to stay ahead and steered towards the shallower water to the East. Betty took a more Northerly course and managed to pull away from the main fleet which decided to follow Argosy heading for East Head and the longer route to Peacock via the shallows along the North side of East Head. A smaller group headed by Betty, with Danny, Fleury and Kitty took the rumb line across to the edge of the Stocker bank via Lowles and Astra, before crossing to the Eastern edge of the channel and heading down towards Peacock. This route turned out to be a few boat lengths quicker than the East Head cruise and Betty followed by Fleury and Danny were just ahead of Argosy as they crossed to the Eastern bank and then rounded Peacock before heading for John Davies. The fleet split tacks in the main channel and it was easy to overstand John Davies in the strong ebb tide. Danny managed to pass Fleury, but Betty held her lead to the mark and then headed back down the Western side of the channel heading for Park. Danny slowly caught Betty with Fleury behind, a boat length or two ahead of Argosy, with Query and Kitty following them. Keen to avoid the following fleet catching them, Danny and Betty sailed parallel courses alongside each other until they reached Park, which they rounded in line abreast. Danny immediately gybed and took the Southern shore to the finish, whilst Betty took the longer route round the Northern shore. After nearly two hours of sailing, Betty crossed the line just under one boat’s length ahead of Danny. Sadly, the fleet finished a man down, with Dainty lodged on the sand off East Head until the tide returned later in the evening. Nick Boyd couldn’t resist the opportunity for some major sandcastle building and kindly volunteered to help Peter bring her home. 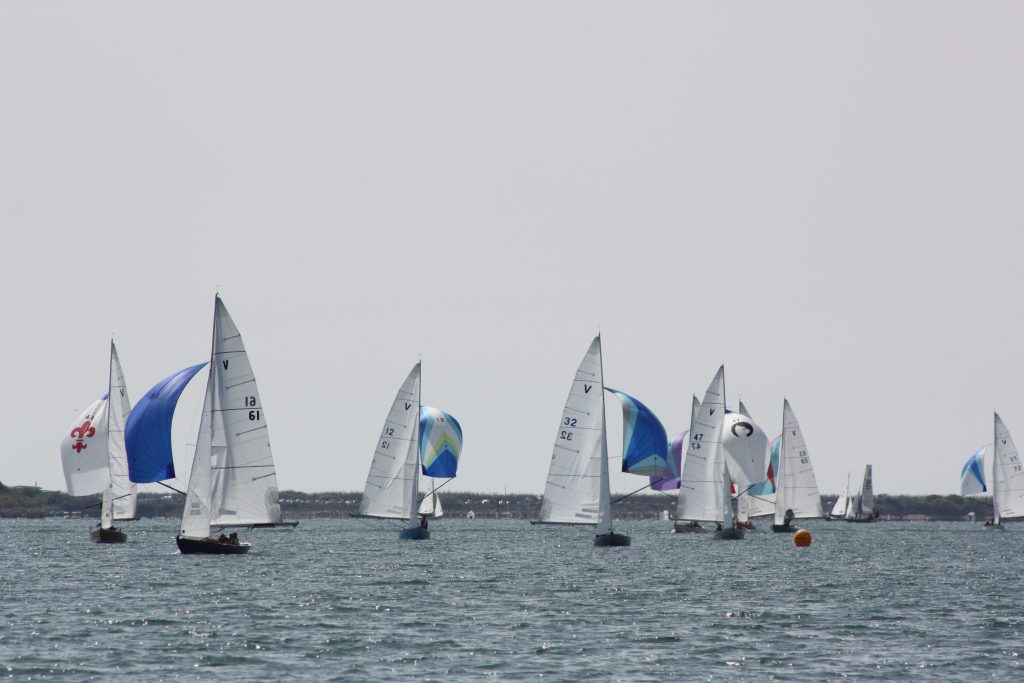 Sunday was a relatively relaxed start at 1120 for two back-to-back races and although the wind did not look too promising in the moorings, there was enough to take the fleet out into the Chichester channel for a start near Baker. The PRO and team were well prepared and set a windward leeward type course with the first mark at Ellanore. The tide was flooding strongly, and the Eastern shore proved to be the place to go to find some relief, although a small group tried the Western side using the triangular plateau to the North of the Camber post. This initially looked a promising choice but the leg across the tide to Ellanore soon removed any advantage. Fleury took a good lead on this first leg, although this was always at risk from sailing into a hole, given the strong flood tide and light winds. A short down-tide port-pole leg to Astra was followed by a beat up to East Head with the tide making it difficult to judge the lay-line into the buoy. A quick gybe round East Head took the fleet on their route to the next turning mark at Baker followed by a beat up to Rookwood for a finish at Baker. The Southerly wind at around 8 knots had behaved well during the race although there was a slight smattering of rain at times during the morning. With Fleury winning and Danny and Holly scoring well, this meant going into the last race, with one discard, 4 boats had 3-6 points and could still win the series if they posted a good final race result and others faltered.

The second race of the day started in a similar wind to the first with the fleet again heading for Ellanore. This time the right hand shore proved to be the better option with the flood now reduced as High Water (12:53) approached, making the leg across the channel less of a handicap. This group of boats rounded ahead of those who had tried the Eastern shore where the wind had reduced to around 5 knots. Danny, having chosen this route, must have been pleased to see her 3 main rivals had gone left.  Danny rounded first followed by Spray and Alchemy. A run down to Peacock followed as the tide turned and the wind started to collapse further. The XoD fleet had also been sent to Peacock from a mark on the Western side of the channel and as fleets converged on Peacock, which had now become the finishing mark of a much shortened course, there was a lot of blanketing on what was a dead run into the now ebbing tide. Some boats managed to cross the line only to drift back on the tide and the finishing team did an excellent job managing a difficult situation. An even better job was carried out by the team on Alchemy, who managed to slip their way past the two leading boats on the run down to the line and finish ahead of Danny and Spray. The wind then decided to die completely, and a slow tow home completed the second day’s sailing of the Henry Chisholm weekend, except for Serendipity who got the outboard out.

The fleet met for a second time at the club on Sunday to attend the Sir Henry Chisholm dinner. This was the first major event since Covid first constrained social behavior in March of 2020 and was much enjoyed by all present, with an excellent meal laid on by the Club. A number of 2021 prizes delayed due to covid and the Sir Henry Chisholm Bowl were kindly presented by Chris Clatworthy, who had raced Sunbeams from the 1950s through to the 1980s, including 35 Cowes Weeks in Sugar Daddy with her husband Alan, and was a close friend of Henry. Congratulations to team Danny (Roger and Tim) on wining the Bowl. A short series of anecdotes was kindly provided by Peter Gormley, who had been very involved in the Sunbeam fleet at the time Henry Chisholm had been class captain. John Ford also presented a model of Melody to John and Petra Tanner, the current owners, John himself having been given the model by the previous owner Mike Harting. The evening ended with the Class Captain leading the toast to the great man with some kindly donated port – we hope he was looking down fondly!