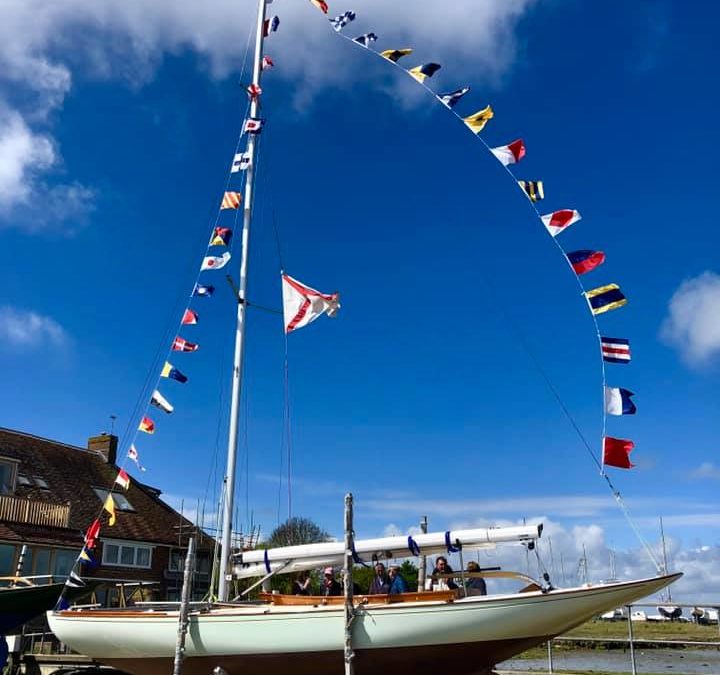 The 96-year-old Solent Sunbeam class welcomed a brand-new yacht to its fleet last week with the launching of V70 Minty which took place at Itchenor, the base for this historic and much-admired classic keel-boat fleet.

Minty’s hull was built on the Isle of Wight by Mark Downer’s AM Structures, a GRP and composites specialist who has built all nine of the new GRP yachts. Minty was fitted out by wooden boat specialists Haines Boatyard based at Itchenor.

Harriet and Simon Patterson are the proud new owners of Minty, which sports a glacial-green hull. They are keen sailors with children who are very active junior members of Itchenor Sailing Club. Now their children are sailing so much they wanted to get back on the water themselves. The new owners are planning to sail as a couple, often with their children joining them as crew. Commenting at the launch they said, “The Sunbeams are fabulous boats, combining beautiful classic lines with exhilarating sailing and competitive racing. The class is very welcoming and gracious with help for sailors new to the boat!”

Following Minty’s launch, the numbers of boats on the water and racing this season has now grown to 27, with the new GRP hulled yachts and the original wooden versions, dating back 96 years to 1923, racing side by side on an equal basis.

The origins of the GRP addition to this classic fleet arose 10 years ago when some of the Class members realised that the fleet number at Itchenor was in danger of declining below the critical mass needed to run a successful class. Enthusiastic local Sunbeam owners Alan Stannah and Roger Wickens wondered if a GRP version of the boat would attract new entrants to the fleet with the lower build and maintenance costs.

Although a number of new wooden Sunbeams had been commissioned since the 1970s, their very high build costs meant there was a limited market of buyers for them. In 2009 the Class gave permission for a trial GRP Sunbeam to be built, and Alan and Roger commissioned Mark Downer to build the necessary moulds and build the trial hull.

Considerable time and effort was spent by Roger designing and sourcing all the deck and rigging fittings and working with the late acclaimed Naval Architect Theo Rye to build the first GRP Sunbeam.

In order to preserve the integrity of the Fleet’s racing, much time and effort was spent to ensure that the GRP Sunbeams would sail exactly the same as the original wooden boats. This was an essential criterion; if the new GRP boats sailed faster, it would be unfair and if they sailed slower no one would buy one!

The philosophy behind the introduction of GRP construction to the fleet was to reduce necessary annual maintenance, lower the build cost of new boats, and to include watertight bulkheads in order to make the yacht unsinkable. The first GRP trial boat V61 Betty was built from scratch in 21 weeks and then raced extensively throughout its first season. Everyone agreed that Betty raced equally against the wooden fleet, the Solent Sunbeam Class accepted her as a Solent Sunbeam, and a green light was given to building new GRP boats.

Interestingly the new GRP Sunbeams have attracted a number of lady owners, who are reassured by the fact that their new yacht will float in an emergency situation. The introduction of the GRP boats to the historic Sunbeam fleet has encouraged many new entrants into the Fleet, including the owners of the newest Solent Sunbeam, V70 Minty.

Read about our new publication, “The Story of the GRP Solent Sunbeams“.

Read about the history of the Solent Sunbeam class.