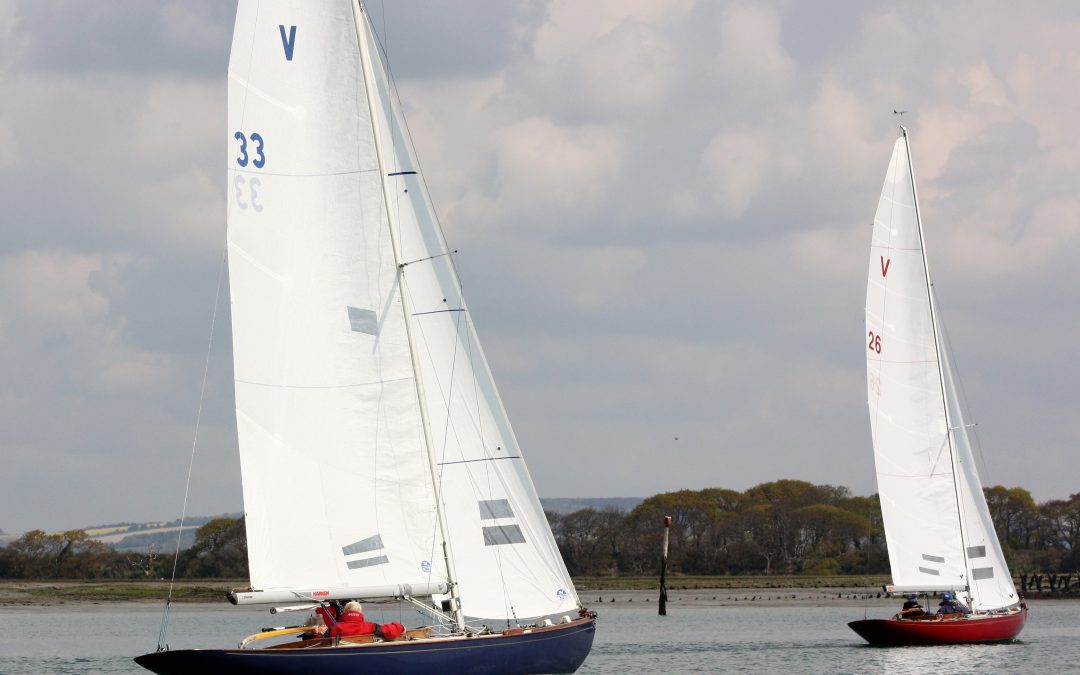 Twenty-two Solent Sunbeams enjoyed challenging light wind conditions throughout their first weekend racing series of the year on the 1-2 May. At stake was the Chisholm Weekend Trophy, which was presented to the Class in memory of Sir Henry Chisholm who rejuvenated the Class in the 1960’s.  For details of Sir Henry Chisholm ‘s impact on the Class please see https://solentsunbeam.co.uk/chisholm-weekend-at-itchenor-sailing-club/

Race 1 started in a light north-easterly wind and with a long start line close to the entrance of the Thorney Channel, the fleet faced a beat to Itchenor in 5 knots of wind but with virtually no tide running. V26 Danny (Roger Wickens and Tim Martell) and V18 Polly (Nick Leach and Martin Evans) chose the northerly end of the line and got the most consistent breeze off the line. V33 Symphony (Viv & Anna Williams and Jill Robinson) started in the middle of the line and proceeded to pick up their own private breeze to take the lead. They were however overhauled by Danny and Polly and V46 Spray (Alan Stannah and Richard Kent) before the first mark.

There followed a long run in less than 5 knots of wind back to Thorney.  The sun had come out and a light south-westerly sea breeze started to fight against the north-easterly wind. After the fleet had sailed through the doldrums, Danny still led from Polly but V68 Sky (Ollie Gilchrist and Becky Wickens) had moved up to third place. 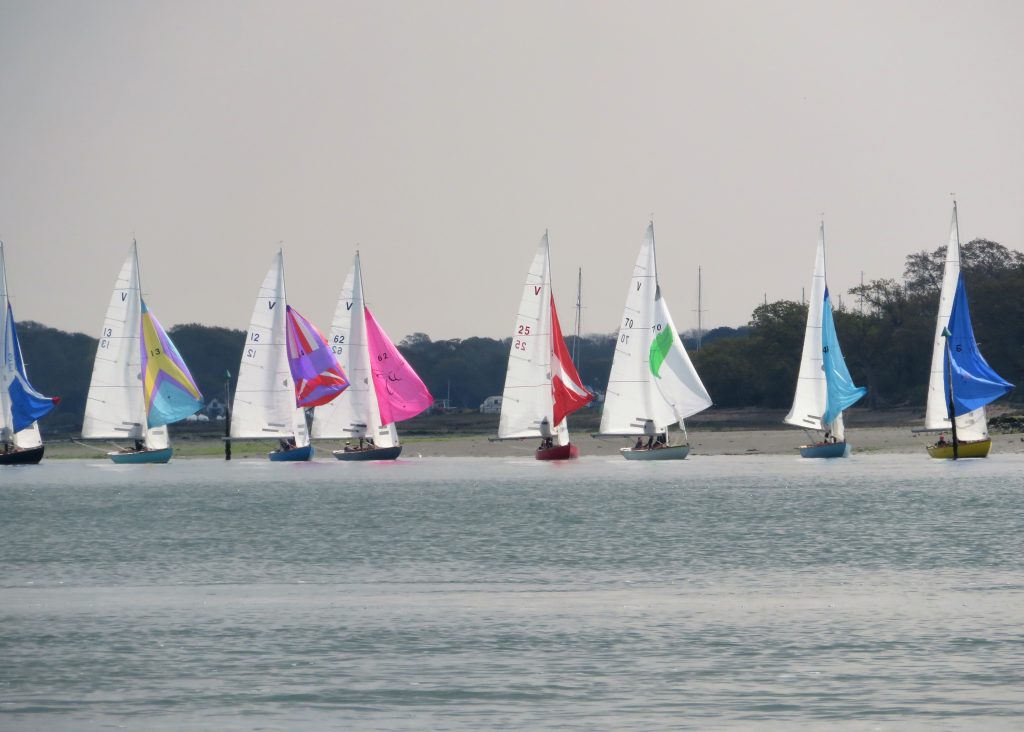 By now dark clouds had formed over Thorney Island accompanied by thunder, a squally wind appeared from the north-west and the fleet quickly reached to the finish line, with the first three retaining their places.

Three more boats  – V11 Harmony (Patrick Green and Duncan O’Kelly), V28 Why (Robert Eggleton and John Rippin) and V27 Jenny (Phil Ingham and Henry Dembinski) joined for the afternoon. By the time that the fleet started race 2, the air temperature had dropped and, as the clouds dispersed, so did the wind.The flood tide was now running strongly so making for more challenging sailing conditions. Race 2 started in a 5-knot southerly wind, albeit there were a number of wind holes where one would make very slow progress.

V26 Danny and V68 Sky had the best starts.  (The picture below shows the Committee Boat end being the favoured though rather congested end of the line). 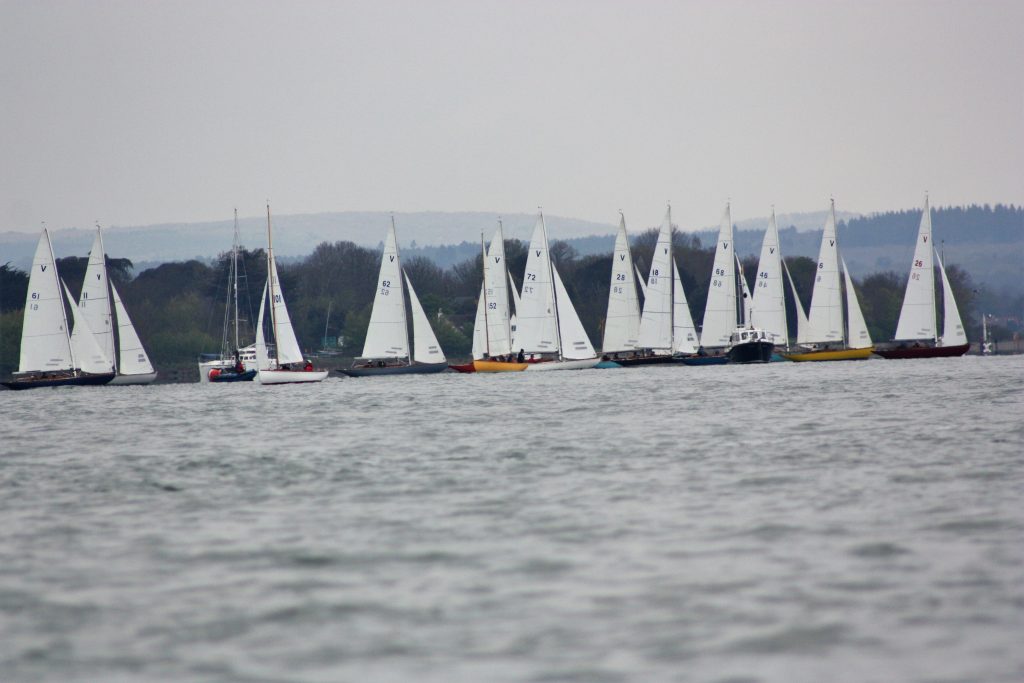 The Pilsey shore was the favoured side for most of the fleet and this was the best way to go to avoid the tide. V61 Betty (Peter Taylor, Robin Richardson and Jonathan Shepherd) followed in third place but V6 Little Lady (Gayle Palmer and Richard Reeves)  did well using the tide to their advantage on the approach to Ella Nore and overtook Betty before briefly touching the sand at East Head. There followed a long close-hauled leg to Dunes and then a reach to Mill Rythe. At Mill Rythe Danny still led Sky but by only a couple of lengths, Danny having inexplicably got caught up in the middle of an XOD race, on the way from Dunes. The Race Officer made the wise choice to amend the course and not send the fleet to Treloar as the ebb started and the wind softened further. The fun then started after Mill Rythe for the second half of the fleet. After the leading boats had rounded Mill Rythe for the beat back to Freddie Brooks there was a 30 degree wind shift which allowed the later boats to sail from Mill Rythe to Freddie Brooks without tacking.

Whilst Danny and Sky were far enough ahead not to be badly affected by the wind shift it was a game of snakes and ladders elsewhere. After the fleet had rounded Freddie Brooks and hoisted their spinnakers for the long run to the finish, the main beneficiaries of the wind shift were V72 Serendipity (Adrian Edwards and Mark Lynch) and V18 Polly. Serendipity managed to hold off Polly to the finish and gain their first podium since the launch of Serendipity in March. V61 Betty managed to recover well, following the adverse wind shift and finished fourth (an important result that boded well for day 2). 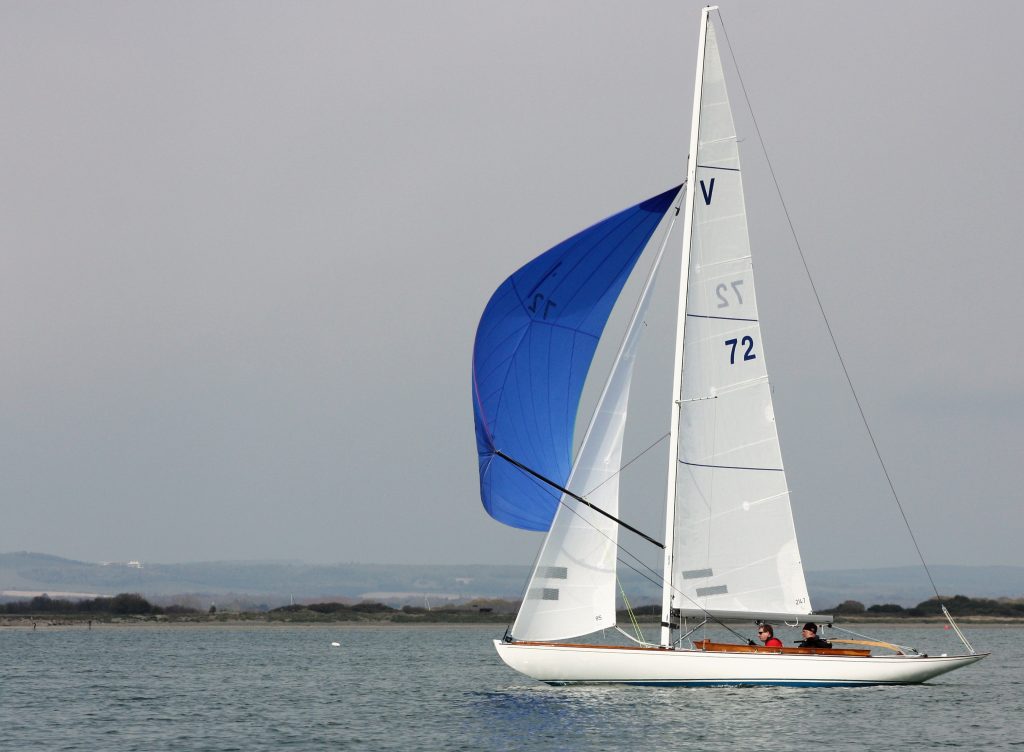 The racing on day 2 provided much more pleasant conditions with a steady force 3-4 south-west wind blowing and the sun breaking through. The first beat to Ellanore led to the whole fleet short tacking up the Itchenor shore in order to avoid the fllooding tide. There were plenty of place changes but V70 Minty (Simon Patterson, Luke Cross and Chris Wells ) and V41 Fleury (Joe and Cathy Burnie) had the best starts and led the way after the first run back to the leeward mark, followed by V26 Danny, V68 Sky and V61 Betty. V70 Misty unfortunately missed the upwind gate. V41 Fleury managed to make it without tacking (where does Joe find that height!)  to remain unchallenged for the remainder of the race. V26 Danny held on to second wrapping up the series with a race to spare. V68 Sky slightly overstood the last windward mark allowing V61 through, whatever they tried they could not establish an overlap to the last leeward mark allowing V61 to finish third. 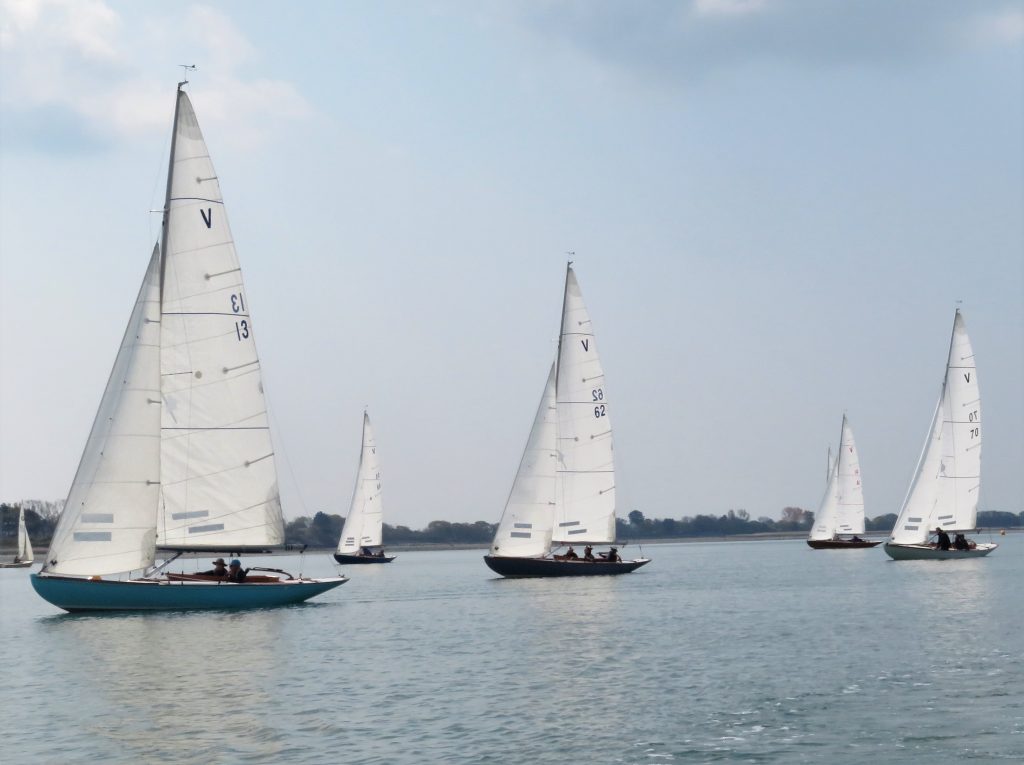 The final race saw some incredibly tight racing as the majority of the fleet tacked up the Thorney shore to the windward mark, John Davis. V26 Danny and V65 Alchemy (Tamsin & Jerry Saunders and Jaqui Evans) had a lonely first beat with only themselves to race as they were the only boats to take the Itchenor shore. As the fleet tacked up the Thorney shore the wind shifted 20 degrees to the west as a cloud passed making the Thorney shore even more advantageous. V41 Fleury and V70 Minty were over the line and had to return to start. The wind had eased slightly making it even more important to find clear wind in such a big fleet. By the second lap V61 Betty held off V41 Fleury with Mike Creagh and William Bodey in Kitty V47 in third. Behind them there were a large number of place changes, including Polly with a last throw of the dice in the series standings tempting fate once too often and running aground on the Pilsey Bank. V61 Betty (Peter Taylor, Robin Richardson & Christine Graves) took the win from V41 Fleury who had managed to sail back through the whole fleet, and V47 Kitty third.

Congratulations to Danny for the series win, with Betty second, overhauling Sky on count back, Polly fourth and Fleury fifth.

Thank-you to Nigel Pattison and his race team, especially Saturday in trying conditions, good to see Firefly back out on the water, Viv and Anna joining Jill in V33, and Mike Weston and his team trying out the carbon mast on Argosy.