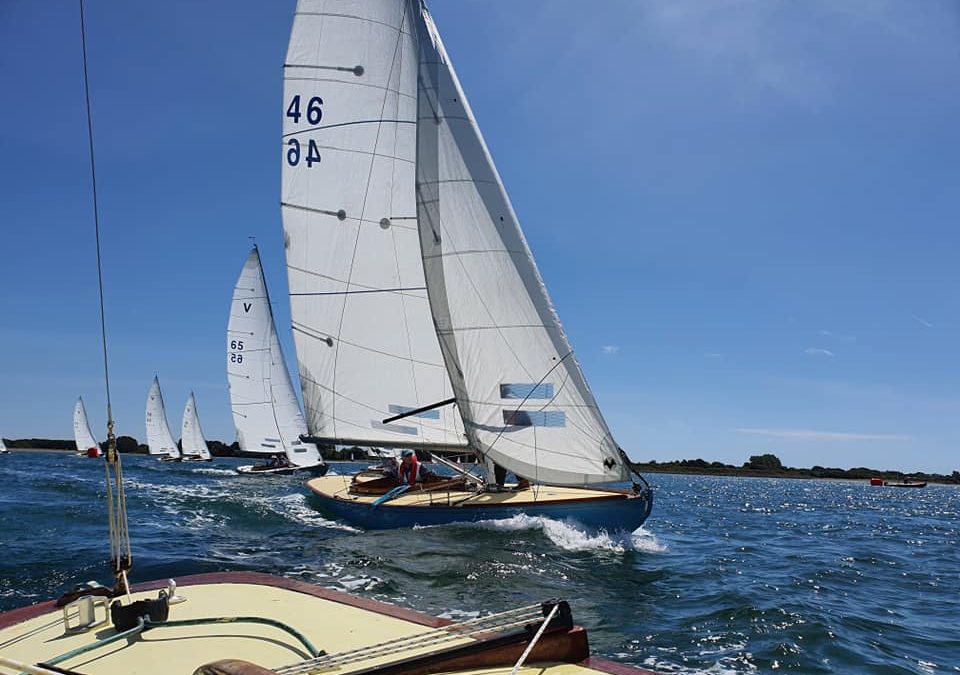 The racing season finally got underway with the series of races for the Chittagong Cup.

On the first day, Tuesday 21 July, a beautiful summer’s morning greeted the 14 Sunbeams who decided to start the first of the season’s trophy series following a delayed start.

PRO Peter Taylor set a line near Camber beacon with a short beat to a special mark near East Head.

With the last of the flood tide running and a pleasant 8-10 knots of wind, it paid to sail inshore and at the first mark V18 Polly led narrowly from V68 Sky and V26 Danny. This was followed by a short run to Astra, before which Sky and Danny overhauled Polly.

The next leg was a short beat to John Davis. The tide was neutral by now and V61 Betty gained with a slight wind shift which took her into third place at John Davis and V26 Danny overtook V68 Sky soon before they approached the mark.

After a short run to Thorney there followed a one-sided beat to Dunes. V41 Fleury came back into contention overtaking Polly.

With the tide beginning to ebb the long run from Dunes to Park meant that whilst V26 Danny sailed off into the distance, the following 4 Sunbeams rounded Park close together. The final beat to Thorney saw more place swapping with V61 Betty rounding in second place closely followed by Fleury, Polly and Sky. The final run against the tide was the usual race to get out of the tide on the long leg to the finish.

Polly managed to overhaul Fleury and Betty and there was nothing between them at the finish!

Behind them V25 Query managed to hold off V36 Melody but unfortunately only discovered after the race that they had been OCS.

Special mention must be made of Jerry Saunders who helmed his first ever race and finished twelfth!

Day 2 was another lovely morning for the second day of racing with 17 boats in attendance.

PRO Peter Taylor again set a line near Camber beacon with a short beat to a special mark near East Head. With the flood tide running and a fluctuating 8-10 knots of wind, the fleet was not quite as spread out at the start as on day 1. A number of boats failed to lay the pin on starboard and had to gybe round to start. This included V26 Danny, the winner of the race on day 1 who also unfortunately hit the pin mark and had to do a 360 in no wind!

V41 Fleury had the perfect start at the committee boat end and sailed off with a good lead. The majority of the fleet went left up the first beat, one successful exception was V6 Little Lady who went right and was second at the windward mark, followed by V46 Spray and V65 Alchemy. A short reach to John’s Folly followed and then there was the traditional high-water destination of Beach on the middle of the Winner Bank.

With the tide still flooding it paid to plug away close-hauled on port tack towards the Winner Bank. V25 Query showed her speed and moved up into third place. In the meantime, Danny was slowly working their way up from the back of the fleet!

Thereafter, on a long run to a very shallow-looking Pivot, V6 Little Lady failed to hoist their spinnaker, so Query moved up into second place with Betty in third and V36 Melody in fourth. With the tide still flooding the fleet largely chose to sail over the Winner to the last windward mark – Treloar. Melody had a good beat and overtook Betty when the latter had to do a 360. The long run down to a special mark in the Thorney Channel saw few place changes except V18 Polly overtook Little Lady and V46 Spray.

The final run to the finish line saw quite a few place changes. Betty overtook Melody to take third place. V46 Spray and Little Lady both failed to fly their spinnakers for much of the final leg and this allowed Danny to take sixth place. Meanwhile, further back, V1 Dainty had to be towed off after hitting “Roger’s bump”!

The results meant there was all to play in the final race of this three-race-no discard series.

On Day 3, the final race in the series was raced in fresher conditions than the first two days with a south-westerly wind varying in strength from 13-18 knots.

PRO Peter Taylor set a line near Park with a beat to a special mark near East Head. The flood tide was running and the majority of the fleet chose the Itchenor side with V41 Fleury taking an early lead and V26 Danny emerging from the pack up the beat. There was plenty of place-changing throughout the fleet with the short-tacking to stay out of the tide. Of the leading boats V12 Argosy chose the right-hand side on the first beat and emerged in third place at the windward mark behind Fleury and Danny and held this position to the end. This is no mean feat since this was only David Bevan-Thomas’s second race for many years having only recently bought Argosy!

A short reach to John’s Folly was followed by a beat to Treloar. As on the previous day it appeared to pay to stem the tide on a long port tack staying in the shallower water over the Stocker Bank. Those boats who sailed closer to East Head did not fare so well.

After Treloar there followed a run back to John’s Folly and another beat back to Treloar. On this final beat one or two boats tacked across to East Head and with the tide now slack fared better than on the previous lap.

V25 Query worked their way up the fleet gradually and managed to hold off V61 Betty despite a late charge and finished fourth. V11 Harmony found a different gear today and finished sixth. It was great to see our Commodore, John Ford, racing V36 Melody who finished seventh. The next 4 boats finished within just a few seconds of each other such was the competitiveness of the racing. It was also great to see Simon Patterson and Chris Wells racing in V70 Minty’s first regatta.

With two firsts and a third place, Fleury won the series and Danny was second.

With 19 different boats competing in the series there is no doubting the popularity of high-tide racing in the Harbour when it is empty of other boats.

Many thanks to PRO Peter Taylor and his team for providing us with excellent racing. 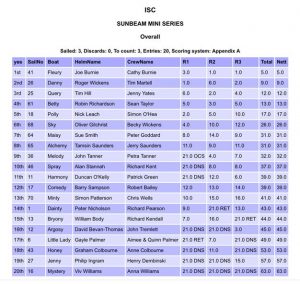