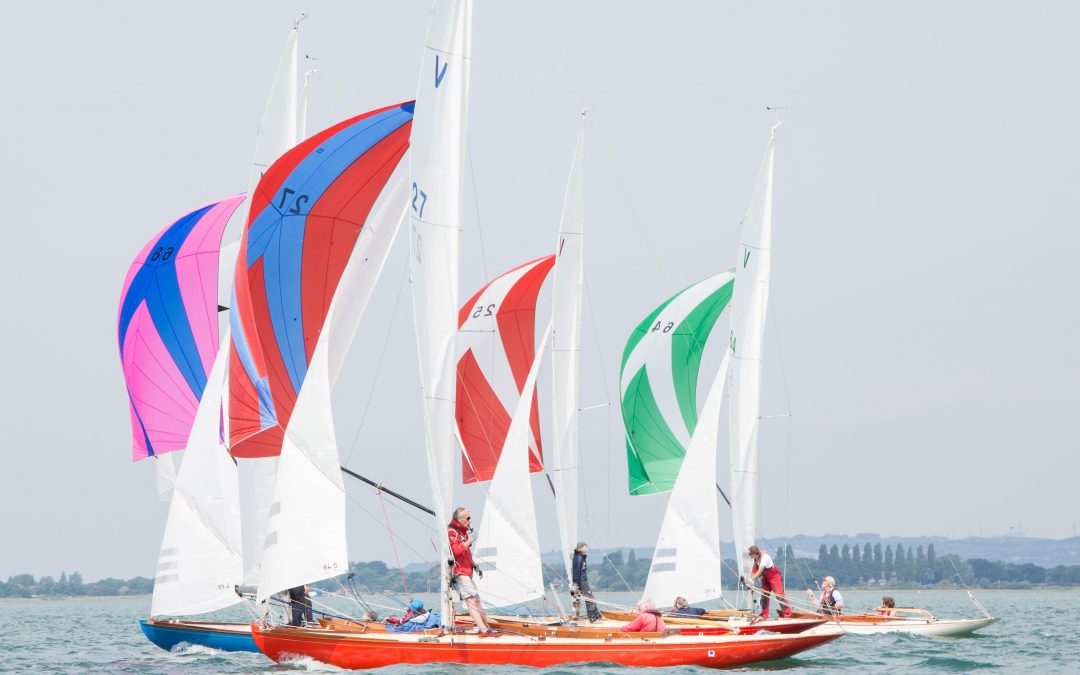 The Bank Holiday weekend at the end of May saw 22 Solent Sunbeams competing in challenging sailing conditions for one of its seasons highlights, the Chittagong Cup, with 4 races held over 2 days. The winds were generally very light and there were at times huge shifts making life very difficult for the Race Officer, Ollie Gilchrist and his team.

The first race was held in light and shifty easterly winds, with a start near the Pilsey Post and a beat to the windward mark near Peacock. A long start line gave the fleet plenty of tactical choices and the fleet was evenly spread along the line at the start. The boats that chose to tack off to the Itchenor shore first fared best despite a favourable tide and at the first mark V14 Jabberwocky led from V25 Query and V47 Kitty. There followed a long run to Dunes. The majority chose to run against the adverse tide and 5/6 boats decided to go the long way round the East Head ‘bend’ which was much longer but provided a steady breeze. The winner of this leg was V1 Dainty who did take the East Head route and was just behind V14 Jabberwocky at Dunes. The boats which went over Stocker Bank on the way to Dunes did not fare so well and were becalmed at times. V26 Danny and V18 Polly were towards the back at the first mark but managed to follow some wind down and make good gains.

The following beat to Peacock saw more solid wind and there followed a short run to Astra with a final beat to the finish. V14 Jabberwocky retained the lead from V25 Query and V41 Fleury. Further down the fleet V65 Alchemy managed to hold off the late charging V26 Danny.

Race 2 saw a slightly stronger southerly breeze. The committee boat end of the start line was very busy with the majority of the 21 Sunbeams choosing to start there! At the first mark V41 Fleury led from V26 Danny and V62 Firefly. On the long reach over the shallow water to Mill Rythe V18 Polly moved up to fifth by going deep over the shallower water. By now the wind had picked up and in glorious sailing conditions the fleet raced to Beach on a one-sided beat. The boats which tacked immediately round Mill Rythe and headed towards East Head did best and V41 Fleury dropped back to third at Beach and V18 Polly moved up to fourth, as the leaders had the benefit of the first of the ebb tide on approaching Beach on port tack. There followed a long run to the finish made more interesting as the last windward mark moved up harbour being towed by a safety boat! Fast-charging V17 Comedy and V70 Minty managed to overtake V14 Jabberwocky and on the last leg V18 Polly overtook V41 Fleury for third place.

Day 2 began with a fitful easterly wind for race 3 and following a short beat to the windward mark, V14 Jabberwocky continued their run of good form, again leading at the first mark from V26 Danny and V25 Query. Jabberwocky and Query chose to run down out of the tide on the Itchenor shore while the rest chose the Thorney side towards Dunes. The itchenor side contingent were however disadvantaged as the Race Officer had required the fleet to pass north of Copyhold and Sandhead on the way to Dunes. This resulted in the rest of the fleet catching up. V62 Firefly took full advantage and moved into the lead which they did not relinquish. As the fleet approached Dunes the wind died completely and this resulted in a game of snakes and ladders as the wind came and went. The final beat to Astra saw a lot of place changing as the wind swung through 45 degrees from time-to-time. V62 Firefly hung on with victory over V14 Jabberwocky with V41 Fleury third.

The final race of the series saw perhaps the strangest wind conditions of the weekend. A well-laid line saw the majority of the fleet start at the committee boat end of the line near the Pilsey Post except for V64 Maisy and V18 Polly who chose the pin. V18 Polly, on port tack, managed to cross the fleet and led the short beat to a special mark on the Rookwood bank followed closely by V62 Firefly and V14 Jabberwocky.  At this stage it was clear that the Chittagong Cup was likely to be won by Firefly or Jabberwocky. Following a short reach to Baker there followed a long run against the tide to John Davis in winds peaking at 5 knots. V62 Firefly crept past V18 Polly as did V14 Jabberwocky. V18 Polly retaliated shortly after and a private breeze took her past V14 Jabberwocky. As the leaders approached John Davis in a freshening south-easterly breeze most of fleet was running in no wind struggling to get round the Pilsey Post. The gap between the leaders and the rest of the fleet grew at an exponential rate as the leaders had a good breeze all the way to the finish and were enjoying a good cup of tea at the Club by the time the majority of the fleet came into view!

Congratulations to V62 Firefly on winning the Chittagong Cup by just 3 points from V14, both sailing very consistently in extremely challenging conditions.