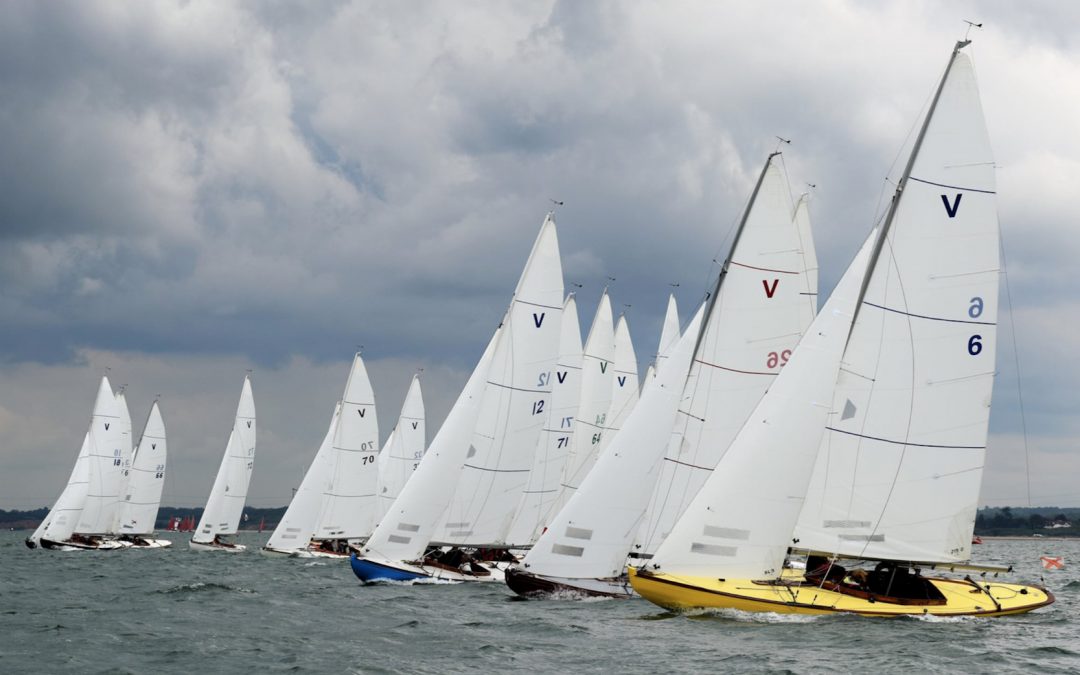 The Solent Sunbeam fleet enjoyed some incredibly close racing in their 22-strong fleet at Cowes Classic Week which was held in superb racing conditions. The Sunbeams were the second largest Class attending the Week and it was the Class’s largest turnout for the Week since its inception in 2008.

The format of the racing was a scheduled 9 races over 5 days, with an hour-long windward/leeward race followed by a race back to Cowes around the various Solent racing marks. The race starts throughout the week were in the eastern solent about a mile west of Lee-on-the-Solent where the tide generally had less of an impact on the racing but the shifty moderate winds kept the racing very close.

In the first race held in a 10-15 knot SSW wind the boats which chose the right hand side on the first beat made good gains and V70 Minty led the fleet home, followed by V26 Danny and V68 Sky. In the second race the first beat was a 1.5 mile leg to Goodall Roofing on the Ryde Middle Bank. The boats which sailed the furthest to the left did best and V25 Query led V18 Polly round the windward mark followed by V26 Danny. V25 Query unfortunately headed for the wrong mark after that. V26 Danny overtook Polly at the leeward mark. On the next beat back to West Ryde Middle, V26 Danny covered V18 Polly on the right-hand-side but the boats which went left gained again. V26 Danny led from V12 Argosy and V70 Minty at West Ryde Middle. V26 Danny unfortunately headed for the wrong mark and let Argosy through. On the final beat V12 Argosy held the lead whilst V70 Minty retained third despite having to take avoiding action as a huge ship passed close by!
The weather forecast had for some time been hinting at a depression heading towards the English Channel and it ran through the Solent on Tuesday. The race committee had broadcast the cancellation of racing on Monday evening which allowed many members of the fleet to look at the classic cars on display on the Parade.

On day 3 the wind stepped up a notch from day 1 with 15-20 knot SSW winds. In the first race the leading boats went left on the critical first beat and V26 Danny won from V32 Holly and V71 Tiffany. In the second race the fleet faced a 2-mile long beat to the windward mark, West Ryde Middle, followed by a short reach to Goodall Roofing and a run to Fastnet Insurance, before the final beat to the finish. V26 Danny led but on the final beat lost the lead after failing to cover V32 Holly, with V70 Minty in third place. After the race it transpired that V26 Danny had completed the second race with a broken mast!

Day 4 started early for V26 Danny at 4am returning to Itchenor SC to pick up a spare mast. The Class Captain requested a 15 minute postponement, the PRO duly obliging having heard the story and seeing the blue spinny on its way from Lallows! In race 5, V68 Sky took the win in a 12-17 knot SW wind, commenting that for four legs V32 Holly was never more than 3 boat lengths behind! They were followed by V70 Minty and V26 Danny despite the early start.

Race 6 started with a three-mile long beat to South Bramble. V18 Polly led for the first half of the beat but was overtaken by V32 Holly and V70 Minty just before the windward mark. By now a strong ebb tide was running and V18 Polly re-took the lead after gybing towards the weaker tide over the Bramble Bank. The boats which ran against the tide in the shallowest water to the east of the Bramble Bank fared best on the three-mile run to Fastnet Insurance and V18 Polly retained the lead from V32 Holly and V12 Argosy. The strong ebb tide led to the fleet spreading out quickly on the next beat to Prince Consort. V32 Holly overtook V18 Polly who managed to stay ahead of V12 Argosy. V18 Polly was however unable to hold V12 Argosy off on the final beat.

With just one race on the final day the overall result was still very much in doubt. The sun came out and light winds led to a long delay until a 12-15 knot SW Wind filled in. A strong ebb tide gave the fleet a boost to the windward mark south of the Bramble Bank. The strength of the tide was underestimated by a number of boats who ended up having to reach back to the mark as the tide carried them past the mark. V68 Sky won the pin end of the line and led for most of the beat until they overstood the the windward mark and let V70 Minty and V32 Holly through with V26 Danny some way behind needing to catch up if they were to win the regatta. At the leeward mark at East Bramble V32 Holly led narrowly from V26 Danny and they proceeded to match race around the rest of the course with the overall Regatta win at stake. At the last leeward mark the first four boats that would end the Regatta Series in that order – V32, V26, V70 and V68 – were line astern each requesting water from the boat behind – it does not get closer than that!

V32 Holly managed to hold off V26 Danny at the finish and took the regatta win by two points. V70 Minty held off V68 Sky for third place and confirmed their overall third place in the Regatta, whilst V68 Sky took fourth place overall. Special mention must be made of V12 Argosy, crewed by three Cornish Falmouth Sunbeam sailors, Paul Pullen, Timmy Bailey and Ed Bolitho who borrowed the boat for the Regatta and finished fifth overall. Another Cornish Falmouth Sunbeam sailor, Phil Badger, sailed the recently launched V71 Tiffany into sixth place overall, crewed by its owner, David Grylls.

Many congratulations to Martin & Vicky Jones in winning Cowes Classic Week in their newly acquired and very beautiful 94-year-old Sunbeam, V32 Holly. A former world champion in the International 14 dinghy Class, Martin Jones summed up the week saying that it had been the closest and most enjoyable racing that he and Vicky had had for a very long time made even more special by racing in such classic boats.

Such close racing was reflected in the Regatta statistics:
5 different boats won at least one race over the 7 races
There were two Falmouth Sunbeam helms in the top 6 boats
The top 6 boats were divided evenly between traditional wooden and newer GRP hulls, although the first two boats were wooden.
The Sunbeams had the second-largest fleet at Classics Week, just behind the XODs.
All in all, a great week’s racing with some new names at the front and some welcome visitors from Falmouth. Let’s hope that next time we can also enjoy in full the legendary Classics Week social programme! 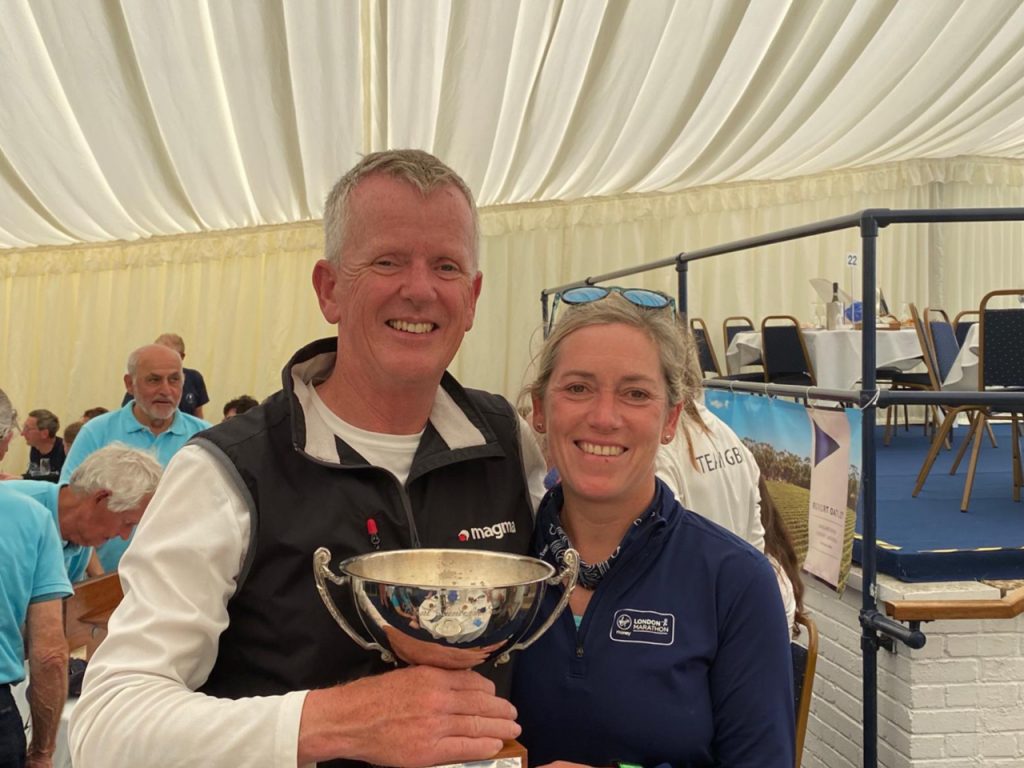