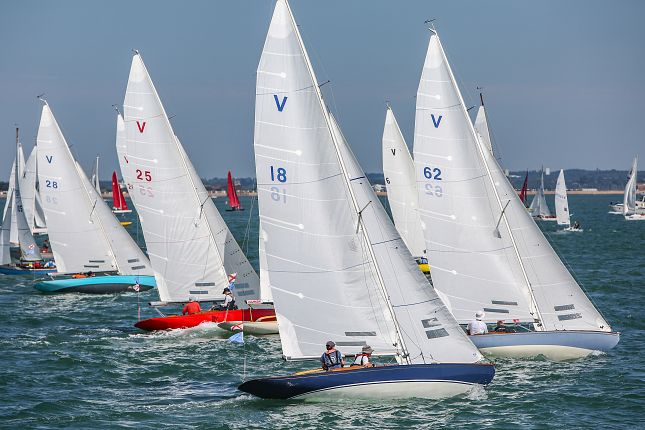 13 Solent Sunbeam classic keelboats are already signed up for racing at this year’s Cowes Classic Week, with another couple expected to be on the start line on 29th July, taking the total to at least 15.

Among this year’s entries is Solent Sunbeam hull no 1, Dainty, which was launched in 1923 and has been sailed for over 50 years by Peter Nicholson. 2019 could be Peter’s lucky year, with his regatta entry already winning the draw for a free place due to its early submission!

Racing on an equal basis alongside the 96-year-old V1, Dainty will be several recent GRP additions to the fleet including V66, Molly and V68, Sky.

The origins of the GRP addition to this classic fleet arose 10 years ago when some of the Class members realised that the fleet numbers at Itchenor were in danger of declining below the critical mass needed to maintain a successful Class. Enthusiastic local Sunbeam owners Alan Stannah and Roger Wickens wondered if a GRP version of the boat would attract new entrants to the fleet with the lower build and maintenance costs.

In order to preserve the integrity of the fleet’s racing, much time and effort was spent ensuring the GRP Sunbeams would sail exactly the same as the original wooden boats, and thanks to the detailed work in the design and build of the new boats, this has successfully been achieved. Interestingly the new GRP Sunbeams have attracted a number of lady owners, some of whom will be taking part in this year’s Cowes Classic Week.

The elegant Solent Sunbeam design comes from the drawing board of Alfred Westmacott, the Isle of Wight based designer who was well known for designing a string of successful one-design keelboats including the Mermaid, X Boat and Yarmouth one-design, all of which are still active in the Solent today. Many of the fleet were built by Woodnutt’s of St Helens on the Island and despite the class being 96 years old, around 70 Sunbeams still regularly race and sail in the UK today.

Cowes Classic Week is a popular regatta for the Sunbeam owners who enjoy the challenging sailing conditions of the Solent as well as the hugely welcoming social events and enduring friendships. Most of the highly competitive racing for the Itchenor-based Solent Sunbeam fleet takes place on Chichester Harbour, so the Solent idiosyncrasies of tides, winds, banks and race courses will provide new challenges to their normal racing environment.

Watch out for racing of the highest standard in one of the most elegant keelboats afloat at this year’s Cowes Classic Week!