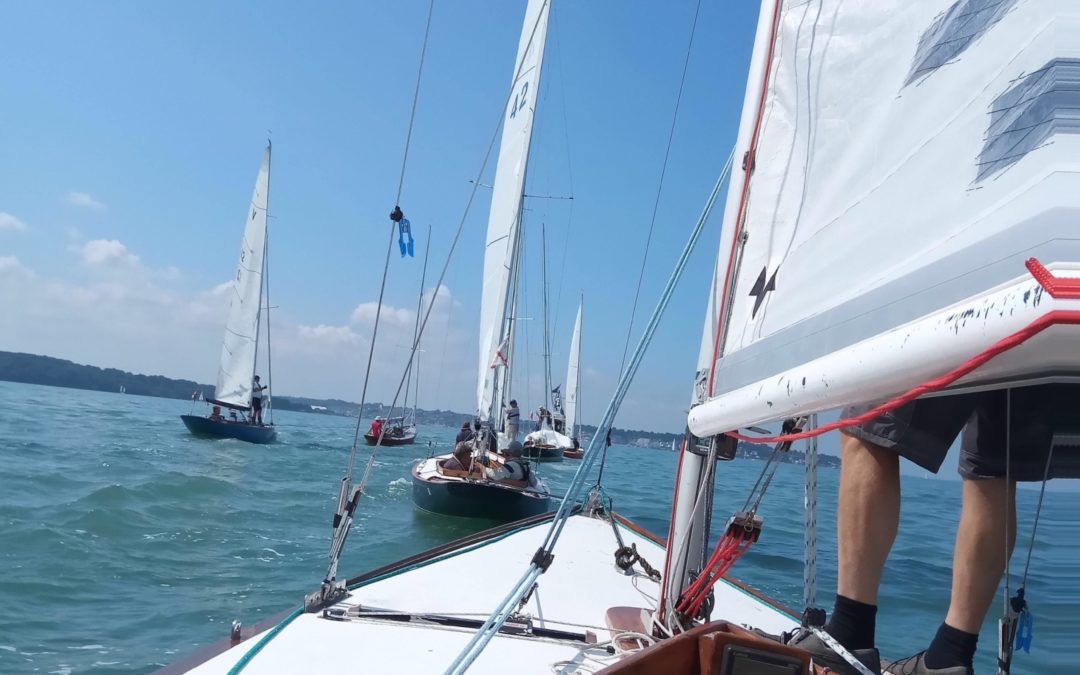 The Dainty Dish race to Cowes

15 Sunbeams started in a light north-westerly and had a very pleasant sail to Cowes once the rain cleared just before the start, when the Class Captain was able to put away his disintegrating umbrella! The start was fiercely contested and V26 Danny won the pin, but unknowingly was recorded as OCS. Danny, Penny and Betty led out of the harbour. There followed a long starboard tack towards the forts. The wind backed and died gong through the forts which meant that the second half of the race turned into a beat against the weak tide.

V36 Melody, helmed by our Commodore, John Ford, made the most of the changing conditions and pressed Danny hard. Query and Penny also add good progression tacking up Osborne Bay. The wind veered passing Castle Point, enabling the leaders to hoist their spinnakers. Danny crossed the line first, but having been OCS, congratulations must go to our Commodore in steering Melody to victory!

A shifty light northwest wind greeted the 13 Sunbeams racing for the Honey Pot the following day. Betty had a good first leg after a relatively poor start, impressively finding all the wind shifts. Danny, however, made amends for her OCS the previous day and won from Betty and Penny.

Overall, the week is likely to best remembered for the off-the-water action.

Monday saw the best “champagne” sailing conditions of the week, with a force 4 ESE wind. The fleet was set three 1.5 mile beats in a pretty neutral tide. Roger Wickens in Danny led most of the way followed by Richard Pearson in Penny and Peter Taylor in Betty.

Tuesday was cancelled due to 83-knot winds (!).

On Wednesday the fleet only managed one of the two scheduled races, due to the forecasted increasing winds and the strengthening spring ebb tide. The short race saw one casualty as Betty’s jib halliard failed but she made to finish fifth. This allowed Danny to win again, followed by Ollie Gilchrist in Sky and Cowes’ newcomers, Rupert and Jenny Eastwood, in Symphony.

On Thursday the race management team did an excellent job in running two races in light winds, by starting close to the Hillhead shore. The first race was started in 5 knots. Those on the left on the first beat fared best, with Melody, Sky and Polly leading at the first mark. Polly and Argosy did best on the first run and were the first boats at the leeward mark. Nick Leach in Polly led to the finish, with Danny moving up to second and Sky in third.

The race management team made valiant efforts at starting the final race on Friday. Unfortunately the wind died to nothing 5 minutes before the start and the fleet was towed home. The record for the number of Sunbeams being towed by one boat must have been broken!

The crews race back to Itchenor was, as usual, hotly contested, with Simon O’Hea helming Polly beating Ian Stobie, sailing Kitty by a mere 8 boat lengths after Kitty led until the last tack before West Pole!