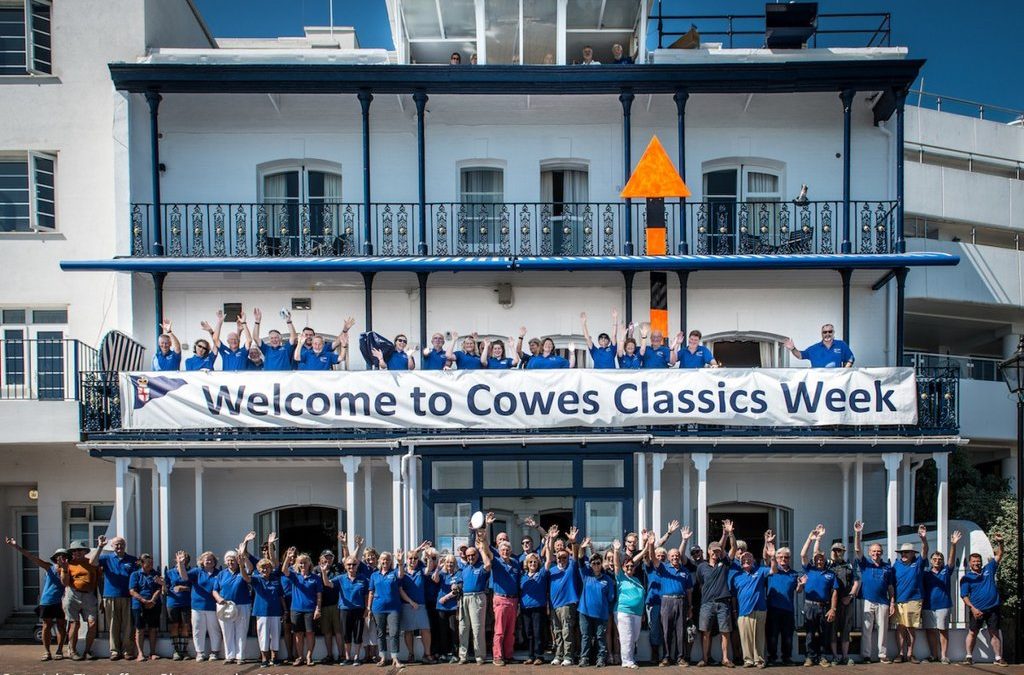 Cowes Classics Week started on Monday with a nice breeze of 12 knots. The five Sunbeams headed to a buoy off Lee-on-Solent for the first race of the series. We were not joined by the Daring class on this first day; they would join us for the rest of the week, so the Race Officer from then onwards had 20 boats to look after.

We were set a course of a couple of good long windward leeward legs over one race for the day with a finish at RLYC having rounded a few racing buoys. The race was won by V42 Penny helmed by Richard Pearson. 2nd was V61 Betty (Peter Taylor), 3rd V25 Query (Tim Hill), 4th V1 Dainty (Peter Nicholson), and 5th was V15 Mayfly (Ray Stedman).

Tuesday was another day of near perfect conditions with 10 knots of wind and no strong tides. We were racing in a similar area to the day before but with slightly shorter windward leeward legs and no race back to Cowes. The first race was won by Query followed by Betty, Dainty, Penny and Mayfly. The Race Officer did a marvellous job of finishing and starting us within 10 minutes of having got the Darings off on their races. Mayfly kept up pretty well considering she did not have a spinnaker for the runs – she is a Falmouth boat, where spinnakers are banned. Penny had a couple of problems which were fixed on the run and at the end of the first race. The second race was won by Betty, then Penny, Query, Dainty and Mayfly.

Unfortunately, we woke to no wind on Wednesday. We were given a 2-hour delay and eventually struggled out to try to get to our racing area. Having got as far as South Bramble in an hour, our race officer abandoned the racing. Of course, as soon as we turned for home a gentle breeze came up!

On Thursday there was 12 knots of wind. By this time the crews had discarded waterproof gear and enjoyed sunny, warm conditions taking plenty of water and sun cream on board instead. Because 2 races had been missed on the previous day, the Race Officer decided he would try and get in 3 races. To do that he laid the windward marks at only 0.7 miles distance apart, which most of us reached with one tack, so if you laid the buoy perfectly then that was race over. Query did just that and got around first and kept the lead for their second win followed by Betty, Penny, Dainty and Mayfly.

By now the race results were getting pretty close, with Betty lying 1st, Penny 2nd and Query 3rd, so there was all to sail for in the next 2 races. The next race was the same course with Penny getting to the buoy in the lead. He raised the spinnaker but unfortunately the shackle on the halyard unclipped, so no spinnaker could be raised! Having chatted it over with his crew it was decided that on the next run the jib would be dropped, the halyard on the spinnaker would be used and the crew would have to simply hope for the best. Persistence paid off and Penny held off Betty for their second win of the week. The third race would be back to Cowes. A bit of a zig-zag with two runs and with no spinnaker, Query overtook Penny who had got to the first buoy in the lead. By the 3rd buoy Penny had retaken the lead and proceeded with the jib down, halyard attached to spinnaker, spinnaker up being chased by Query all the way to the finish. Exciting stuff.

On Friday we woke to little wind but the racing committee – who was hoping to get in 2 races for all classes – set us off early. This was to no avail and all racing was abandoned much to the relief of Penny’s helm and crew (Sarah and a hard-working Richard Kendall).

Just having five boats competing was great fun: racing was all very close, and our Race Officer and his assistants did a wonderful job. Having done every Classics Week since its inception 11 years ago, we think this was one of the best, because the weather conditions were generally great for racing (a steady 10/12 knots), and because there was a high standard of race management and a great camaraderie among the competitors.