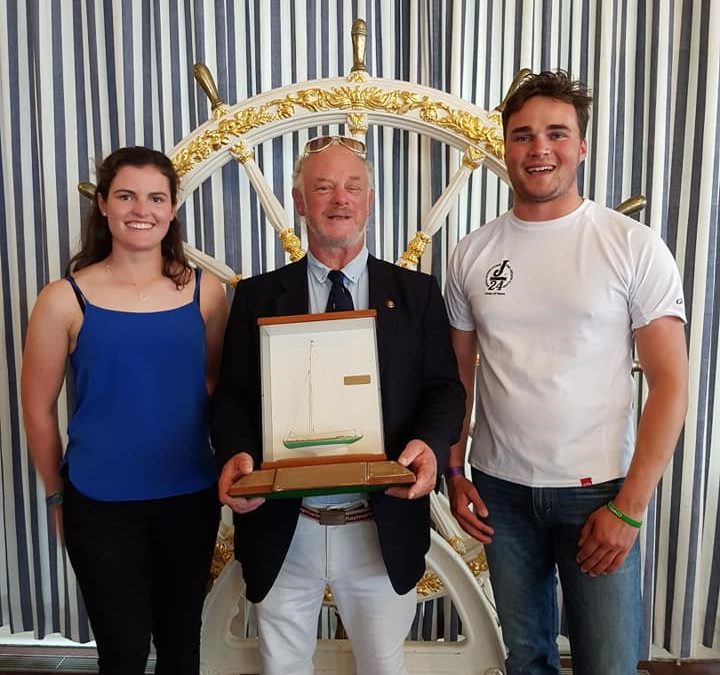 A week later after Cowes Classics Week, five Sunbeams re-convened for Cowes Week. Hereby some words from our roving reporter:

With all racing abandoned on Saturday and Sunday, the 5 Sunbeams were desperate to get out racing. We got a course going West as far as Gurnard Ledge with Gayle getting a cracking start right in. Melody was first around the mark though but all 5 very close together. On the way back to the finish Gayle and Julian Hawe put their boats aground and Penny sailed on with a good lead but was caught and overtaken by Firefly. With metres to go, Penny got the lead back and won by a boat length. The happiest person that day was Peter Nicholson who got a Squadron gun for the first time in years. He had an almost complete novice as sole crew who thought the whole thing was wonderful.

Tuesday was windier but steady 18 knots. Running start. Sent East with the fleet splitting. Julian Money helming Penny made a good tactical move and lead for a long time but unfortunately went around a buoy the wrong way and by the time they had rewound themselves had moved to last. Incredibly the 2 leading boats then did the same thing at a later buoy but had to retire so positions changing with Gayle coming out on top.

Richard Pearson took over the helming on Penny but the younger crew on the other boats faired better in the wind and rain treatments with the result that Firefly got their first win of the week.

Thursday was a sunny but very windy day and everybody took the decision to put in one reef. Unfortunately Penny had a breakage on the way to the start and Dainty were only 2 up so both were DNC. We all went to the Royal London for coffee and to watch all the racing from the balcony. After 2 and a half hours, Firefly beat Melody by 12 seconds. Incredible! By now all 5 boats had been given points for retirement or not competing, so all to play for.

Friday dawned windy again and the racing committee started us at a new area just off Castle Point near Norris. Tricky gusts and a running start with the winds increasing during the course of the race. It was supposed to be a short, sharp race but lasted 2 hours and by the end all helms and crews were glad it was over. Melody got their first win of the week and with no discards, Julian Hawe and his young crew won the week by one point from Stewart Reed on Firefly. Penny was 3rd on count back from Little Lady and Dainty last, but no means least.

Photo: Melody and crew with the Half Century Trophy!

We all sailed back to Itchenor with a strong SW behind us taking only 2 and a half hours. It was lovely to be back to gentle, calm waters!!