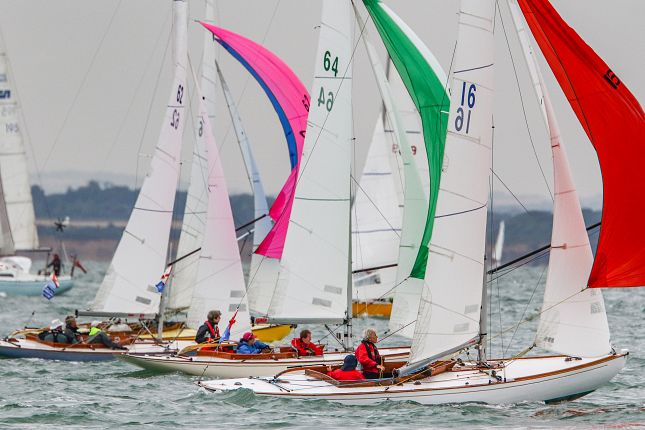 On day 1 the new start line caught out a number of boats. V26 Danny had the best start and led V62 Firefly to the finish. In light winds and strengthening tides the finish line came painfully slowly for most boats. The new breakwater finish line also caught out some boats with V16 Mystery just beating V36 into third place.

On day 3 the fleet enjoyed a classic sea breeze day. The first beat caught the fleet out as most boats overstood the windward mark, Quinell. Firefly took the lead early on but was steadily hauled in by Danny with Penny taking third.

Day 4 saw winds ranging from 3-20 knots with some wild fluctuations in direction. The wind died just after the start and when it re-appeared Penny made the best of it reaching up the Green towards the windward mark. The real excitement occurred on the long beat to the finish when the wind shifted 45 degrees. V36 Melody, V64 Maisy and V32 Romany made huge gains by tacking to the island shore first. The majority of the fleet sailed behind the Bramble bank to avoid the tide. Firefly managed to stay ahead of Danny with Penny in third.

Wednesday provided the strongest winds of the week so far with 25 knot gusts and the fleet racing in the western Solent, with a strong ebb tide resulting in rough conditions. Polly took an early lead but overstood the first mark. Danny led to the finish followed by Firefly with Penny in third and V6 Little Lady finishing strongly in fourth.

The final race was abandoned due to the 40 knot winds, but with four first places, Danny retained the Betty Moore trophy as the Class celebrated 95 years at Cowes.