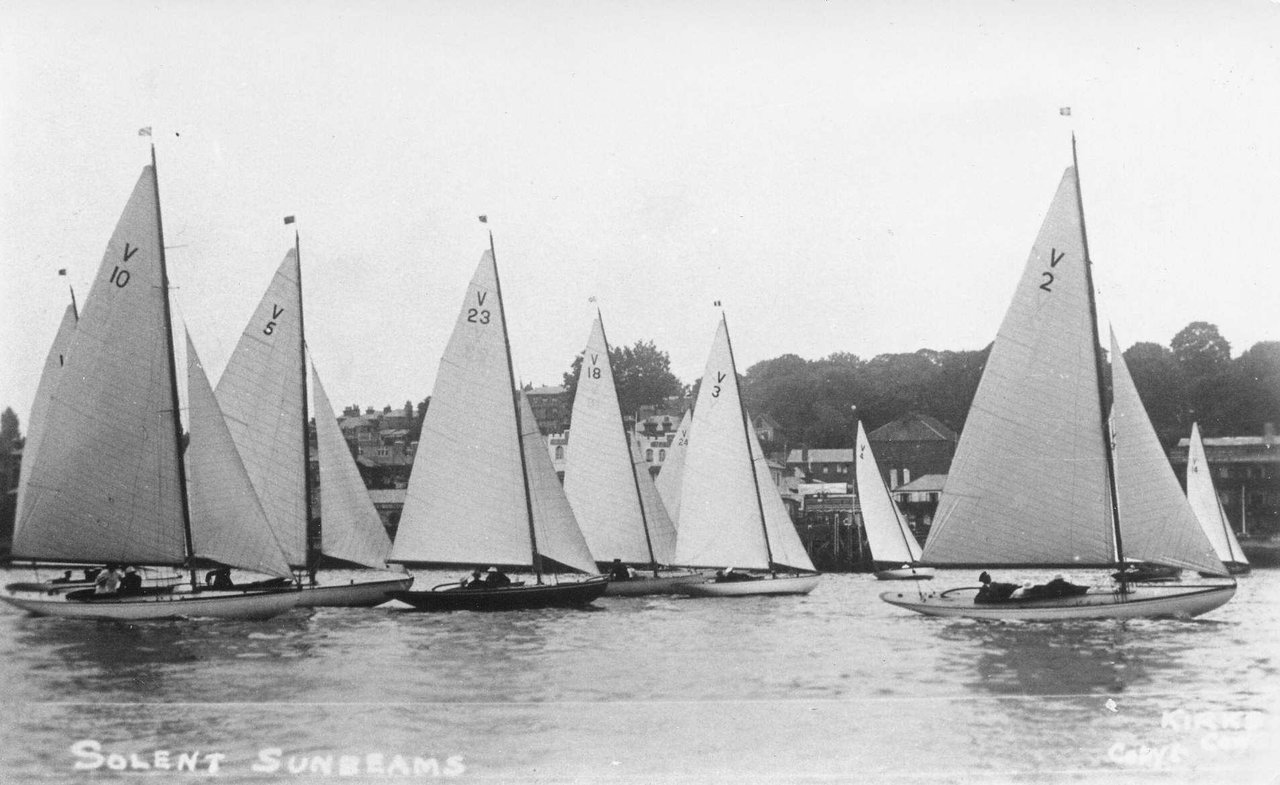 The Solent Sunbeam – continuous development over the years

Contact us if you would like to order a copy of “The Brilliance of Sunbeams” to read the full history of the Sunbeam class.
The Sunbeam was the last of a group of one-design yachts by Alfred Westmacott (1867-1936), which included the Yarmouth (Isle of Wight) One-Design, the Seaview Mermaid (now replaced by a new design) and the well-known and numerous X One Design.

A traditionally trained naval architect from the Victorian era, Westmacott responded to a commission in 1922 from three Hamble-based yachtsmen to design a racing dayboat by producing a boat that was not only pretty but one that could handle the boisterous conditions of the Solent.

Thirty-nine Sunbeams were built to Westmacott’s design, all of them by Woodnutt & Co. Ltd., of St. Helens, Isle of Wight, between 1922 and 1938. They were regularly raced in the Solent and at Falmouth until the outbreak of war in 1939.

After the war Woodnutt closed its St. Helens’ yard and moved to Warsash (where it suffered a disastrous fire), and finally sold out and closed down.  In the course of these events many of its records were lost or destroyed, including all the Sunbeam plans and moulds.  No new Sunbeams could therefore be built, but, owing to the high standard of the specification, all the original boats are still remarkably efficient and seaworthy.  One boat, “Judy”, was lost at sea in extreme weather conditions whilst racing in Cowes Week in 1939.

In 1965, the plans were redrawn by taking off the lines from one of the boats.  One or two old drawings were also found in the possession of former owners.  New construction thus became possible, and in 1976, a 40th Sunbeam, V40 “named Vee Forty” was built (to the original specification) by Curtis and Pape of Looe, Cornwall.  The same firm then carried out the main construction of V41 “Fleury” for a Solent owner, who had her completed by George Haines and Son Limited at Itchenor, and launched in 1979.

In 2009 the Solent fleet approved the wider use of epoxy and the construction of GRP boats. The Falmouth fleet did not agree with this and all Falmouth-based boats are made of wood.

Epoxy enables considerable savings in upkeep and prolonging the life of the boats. V25 “Query” was the first Sunbeam to be epoxied and was relaunched in July 2011.

V61 “Betty” was the prototype GRP boat and was launched in 2010. Subsequently nine GRP boats have been launched. Read more about the background to this.

In total 48 traditional wood-built Sunbeams (one of which was lost at sea) and 9 GRP Solent Sunbeams have been built. All are members of either the Solent or Falmouth fleets.

Come and try out a Sunbeam

If you’d like to be kept abreast of our news, subscribe to our email newsletter. We’ll send out occasional news about what we’re up to.

We will never share your email address with third parties. Read our Privacy Notice for further info.