Interview with Peter Nicholson: article in the Chichester Observer, 25 October 2018 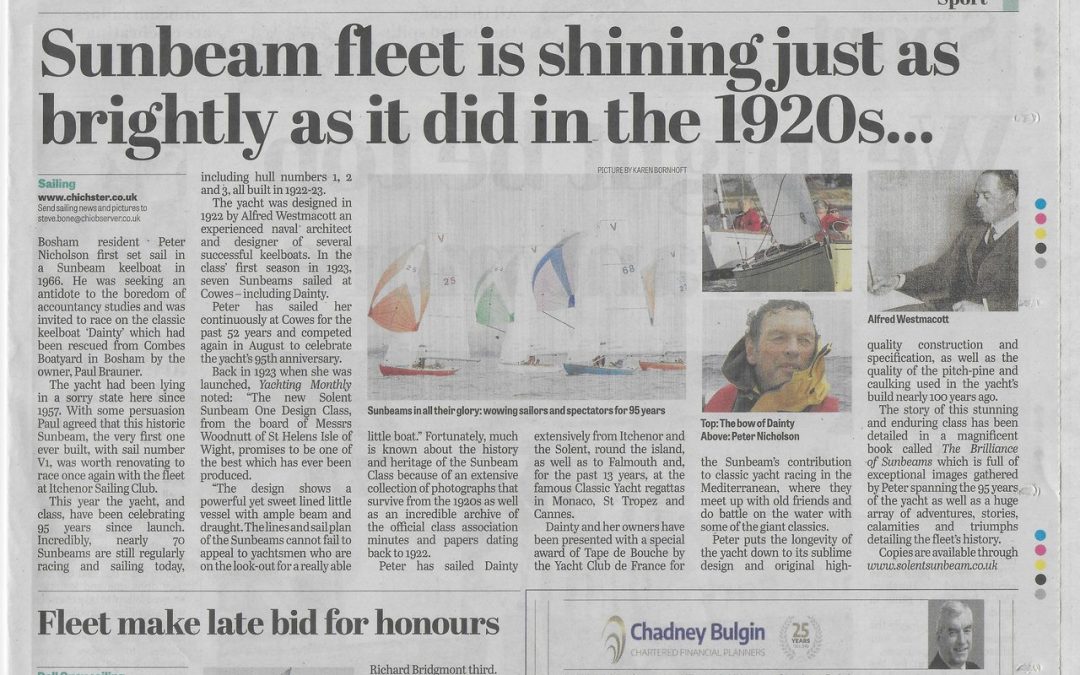 Bosham resident Peter Nicholson first set sail in a Sunbeam keelboat in 1966. He was seeking an antidote to the boredom of accountancy studies and was invited to race on the classic keelboat ‘Dainty’ which had been rescued from Combes Boatyard in Bosham by the owner, Paul Brauner. The yacht had been lying in a sorry state here since 1957. With some persuasion Paul agreed that this historic Sunbeam, the very first one ever built, with sail number V1, was worth renovating to race once again with the fleet at Itchenor Sailing Club. This year the yacht, and class, have been celebrating 95 years since their launch! Incredibly nearly 70 Sunbeams are still regularly racing and sailing today, including hull numbers 1,2 & 3 which were all built in 1922/3.

The yacht was designed in 1922 by Alfred Westmacott who was an experienced Naval Architect and designer of several successful keelboats. In the Class’s first season in 1923, 7 Sunbeams sailed at Cowes – including sail number 1, Dainty. Peter Nicholson has sailed her continuously at Cowes for the past 52 years and competed again in August 2018 to celebrate the yacht’s 95th anniversary.

Back in 1923 when she was launched, Yachting Monthly noted, ‘The new Solent Sunbeam One Design Class, from the board of Messrs Woodnutt of St Helens Isle of Wight, promises to be one of the best which has ever been produced. The design shows a powerful yet sweet lined little vessel with ample beam and draught. The lines and sail plan of the Sunbeams cannot fail to appeal to yachtsmen who are on the look-out for a really able little boat.’

Fortunately, much is known about the history and heritage of the Sunbeam Class due to an extensive collection of photographs that survive from the 1920s as well as a truly incredible archive of the official Class Association minutes and papers dating back to 1922.

Bosham resident Peter has sailed Dainty extensively from Itchenor and the Solent, Round the Island, as well as to Falmouth and, for the past 13 years at the famous Classic Yacht regattas in Monaco, St Tropez and Cannes. Dainty and her owners have been presented with a special award of Tape de Bouche by the Yacht Club de France for the Sunbeam’s contribution to classic yacht racing in the Mediterranean, and they intend to be there once again this September to meet up with old friends and do battle on the water with some of the giant classics.

Peter Nicholson puts the longevity of the yacht down to its sublime design and original high-quality construction and specification, as well as the quality of the pitch-pine and caulking that was used in the yacht’s build nearly a hundred years ago.

The full story of this stunning and enduring class has been detailed in a magnificent book called ‘The Brilliance of Sunbeams’ which is full of exceptional images gathered by Peter spanning the 95 years of the yacht as well as a huge array of adventures, stories, calamities and triumphs detailing the history of the fleet. Copies are available through www.solentsunbeam.co.uk.