The Sunbeam fleet raced in champagne sailing conditions on Day 1 of keelboat week. The fleet started in 10 knots of a strengthening south west sea breeze which touched 15 knots at times. Race officer David McGregor set a start line between Chalkdock and Baker and the windward mark near John Davis. 5 boats started at the committee boat end and tacked up the thorney shore, with the rest of the fleet choosing the Itchenor shore to avoid the adverse flood tide.

V61 Betty led the contingent up the thorney shore and popped out just in first place at the windward mark ahead of V14 Jabberwocky who had chosen the Itchenor shore, thus showing that there was very little in the choice of route, with perhaps the thorney contingent benefiting from less wind shadowing from other boats. Shortly behind were V64 Maisy, V26 Danny , V41 Fleury and V18 Polly. There followed a short two sailed reach to John’s Folly, followed by a beat to Beach. Again there was very little in the choice of route, but Danny and Fleury had a close battle tacking over the Winner Bank. V61 Betty retained her lead over V14 Jabberwocky. There followed a run to John Davis and a beat to Calvert with very little tide running. There was again very little in it between the leaders but approaching Calvert from the east head direction was the favoured route and Danny and Fleury overtook Jabberwocky, with Maisy staying in fifth. Further back V47 Kitty and V46 Spray overtook Polly.

From Calvert there followed a run to Thorney before a final one sided beat to Dunes. Polly managed to pass Kitty and Spray on the beat, there followed an intriguing run against the ebbing tide to the finish via a special mark near Chalkdock. The positioning of the special mark meant that each boat had a number of choices for the final run. Danny and Fleury decided to go the long way round the east head bend on the Itchenor side in the hope that a stronger sea breeze would carry them past Betty. Most of the other boats chose the direct line towards Park. However, Spray and Kitty decided to cross sides just after passing Camber beacon.
Danny and Fleury did gain on the longer route but not enough to overtake Betty, who took the win. Danny just managed to hold off Fleury for second place and Jabberwocky held off Maisy. Similarly Polly held off a fast charging Spray and Kitty for sixth place.

As someone said once ashore, if you didn’t enjoy today’s sailing, don’t bother coming back! Glorious racing conditions in hot weather with excellent race management

Pinch me, 65 plus boats on start line in three fleets all offering a slightly different experience, turquoise blue skies, east/south east/ southerly sea breeze to confuse the PRO, and ensure plenty of water drunk, suncream employed and an empty high water harbour…enjoy! And so to day 2. 18 Sunbeams on start line. Yesterday the first 8 boats to get there were split 50:50 as to whether to go left or right to Mark X off a mid week 1/2 empty east head. A 20 degree shift on the gun found Polly on her own at the pin, more about her when the fleet re-made contact at tea on the lawn. Danny came out second but slight starboard wind shift back into the Rookwood beach allowed Sky to get through and promptly tack on Danny for the long port hike heading South. Becky very happy! Tight reach to Johns Folly and then a beat to Beach, Polly on the horizon and Sky in second with Betty and Danny all over her transom. An up/down number of legs, Danny getting through to second, Betty third, Jabberwocky coming through to 4th with Sky hanging onto their coat tails. Polly apart,  with rumours of Martin taking photos and Nick his binoculars the next 4 boats remarkably close  after 2 hours of racing. Congrats to Polly… Tiffany launching tomorrow, weather set fair for at least more of the same for next 24 hours.

Itchenor Keelboat Week continued its theme of light winds on day 3, a notch down on day 2, with winds generally in the 5~10 knot range with some lighter patches. As with day 2 the leader at the first windward mark held the lead to the end despite some great close racing behind.
The committee boat end of the start line near the Pilsey Post was once again hotly contested and the action here was quite significant to the end result. Not every boat off the line at the first attempt! The majority of the fleet sailed off the line on port tack towards Pilsey Island to get out of the flood tide, towards the windward mark inshore of the East Head mark.
V18 Polly led the pin end contingent followed closely by V71 Tiffany – she was only launched in the morning – and they found some breeze heading towards the Rookwood shallows. At times the wind dropped below 5 knots and there seemed to be a lot of holes. However, V27 Jenny showed the rest of the fleet the way as they apparently stayed on port tack for 5 minutes more than anyone else before tacking across towards East Head. By doing this they missed the holes and rounded the windward mark with a good lead from V36 Melody and V64 Maisy, both of whom also hung on port tack for longer. Then followed V14 Jabberwocky and V41 Fleury, V47 Kitty and V11 Harmony. Fleury had apparently taken 2 attempts to start!

A spinnaker reach to a special mark near Runway was followed by a beat to Dunes and a run down to Pivot. Maisy managed to overtake Melody but made little progress on catching Jenny. Polly overtook Harmony. After Pivot there was another beat to Gardner. As the spinnakers were hoisted for a reach to Thorney, Melody was overtaken by Jabberwocky and Fleury. After a short beat to East Head, there followed the final run – against an ebbing tide – to the finish at Park
This is where the fun started. The wind was now very light. Whereas Jenny still had a good lead, the following boats were getting closer together. Polly kept out in the channel and found more breeze and converged with Maisy and just behind Jabberwocky. As the boats crossed the tide to the finish Jabberwocky managed to stay ahead of the pursuing boats. Polly, Maisy and Fleury were adjacent to each other but it paid to be at the Park end of the finish line so Fleury, Maisy and Polly were 3rd, 4th and 5th. Kitty, Melody and Harmony were next and well done to David Grylls and Falmouth Sunbeamer Phil Badger for their 9th place in Tiffany’s first race.

Many congratulations to Phil Ingham and Henry Dembinski in Jenny for their well-deserved win. Jabberwocky’s excellent second place puts them in the overall lead with 2 races to go. We can but hope for more wind tomorrow!

Day 4 race report, easy one, not enough wind and PRO sensibly decided that there wasn’t enough time before the tide started ebbing, so race cancelled. The wind then died so we had to paddle home in the pouring rain. Class Captain clearly chose the right day to have a board meeting. Well done to Adrian and Mark on Serendipity on winning the race home assisted by their brand new electric outboard! Apparently very satisfying given Tim Hill’s offshore powerboat racing pedigree! 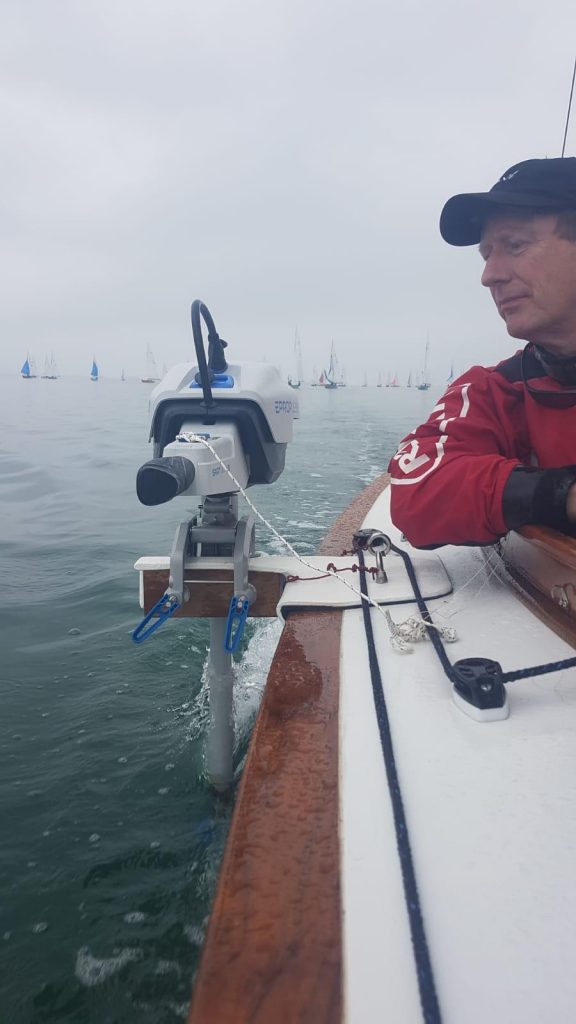 With Thursday racing postponed due to lack of wind the class looked out of the window  apprehensively Friday morning at the dark grey clouds and more importantly at various internet based forecasts for wind gusts and tropical rain, what a difference from Monday to Wednesday.

David our PRO set up down harbour for 2 back to back races starting at 3.10pm, in 18 knots and as predicted tropical downpours, with all to play for with 6 boats within 6 points of each other and discards coming into play.

A short beat to Park, with Fleury on port  narrowly crossing Polly and Sky into the mark followed by Jabberwocky

A run down wind boats abreast, Danny trying hard to get back into the fray running aground hard off the Pilsey bank and Maisy keeping clear of others on the beat back up harbour making progress into third place. Fleury kept her lead into the finish with Jabberwocky up to 2nd

Pin end bias, with plenty of flood and enthusiasm leading to 4 OCS Boats, a beat to Star placed in an unusually down stream and left bank position. Plenty of wind shifts, puffs coming down the track and tidal considerations
V71 Tiffany on only  her third day of racing found herself leading the fleet back to Dunes (not knowing she would later be called OCS), following Maisy having thought Star had changed into a red dwarf in colour and continued sailing towards Thorney Island Sailing Club (Regatta and great teas this Sunday!)

Roger and Tim in making up for their race 4 retirement pulled out all the stops to sail through to take the lead, spinny flying on a very tight fetch.  A more sedate fetch back to the Gallon finish with the last of the flood and wind and rain reducing found Fleury holding on to 2nd, with Betty 3rd

Congrats to Fleury, Joe and Cathy, with Team Jabberwocky coming in 2nd, and Betty 3rd, with Sue and Maisy winning first Lady helm.

Thank you to David and the race team, in their first year of running this event,

To Amanda, Ryan and their on water and onshore teams without whom the week could not take place.

22 boat one design close racing in near to champagne conditions for Monday-Wednesday, I leave you with a picture of our Vice Captain crossing the finish line on Wednesday celebrating a bucket list moment!