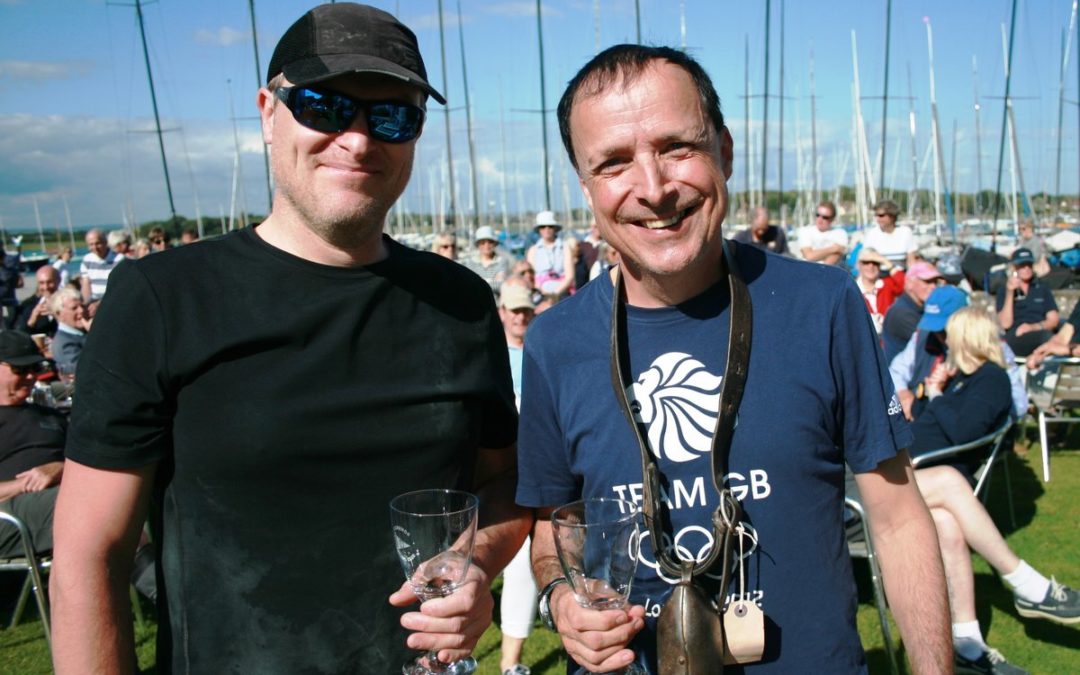 It must be said that it wasn’t the hottest Points Week in recent years! Indeed, on day 2, your Class Captain decided to try and keep warm and stay dry as long as possible, which is why an umbrella came in very handy on the long run down to the start!

The racing was incredibly close throughout the 19 boat fleet and with one race to go, only 2 points separated second to fifth place!

A steady Force 4 SW wind greeted the 16 Sunbeams on day one. The high tide and an empty harbour enabled the Race Officer, Roger Wickens, to lay a very long start line near Park giving the competitors a choice of going either side of the first beat against the tide. Only 3 Sunbeams chose to sail on the right-hand side. V41 Fleury and V18 Polly had the best start and led the fleet on the left-hand side, whilst V61 Betty led the boats on the right and popped out second at the windward mark near East Head,

Following a short reach to John’s Folly, V41 Fleury led but unfortunately an incident with a cruising boat led to her retirement. V61 Betty took the lead and extended her lead over the rest of the fleet all the way to the finish.

V18 Polly held off V14 Jabberwocky and V25 Query on the final run. Further back, chaos ensued as one boat went round the finishing mark the wrong way!

Light winds and rain greeted the fleet on day 2. After a short beat to Teapot, V36 Melody led.

It was a short reach from Teapot to Ella Nore and those staying out in the tide generally gained due to having more wind. V14 Jabberwocky forged ahead of V41 Fleury and V33 Symphony. There followed a short fetch from John’s Folly to East Head and then a longer run to Pivot. At this stage the fleet converged with the reaching XOD fleet which made things quite exciting for a minute or two! Another reach to Gardner followed and whilst V14 Jabberwocky extended her lead, V18 Polly and V36 Melody moved into second and third places. The penultimate beat from Gardner to Rookwood gave some excellent tactical options but the East Head route paid off. The final beat saw V18 Polly lose 3 places by not covering the boats behind! V14 Jabberwocky won by a good margin from V41 Fleury and V33 Symphony.

A very light NW wind led to a general recall at the first attempt. The race officer hoisted a black flag for the second attempt which miraculously meant the fleet got away cleanly! The third leg – a beat from Ella Nore to a mark near Copyhold led to gains for boats which went right on the beat. After a long race in which much of the sailing took place in very tricky light winds, V41 Fleury held off V18 Polly and V36 Melody.

The penultimate race was held in WSW 14-18 knot winds. The first beat from the start near Rookwood to SW Pilsey was critical, with the boats sailing the left-hand side well ahead. V25 Query led from V42 Penny and V61 Betty. On the second leg V41 Fleury was put out of contention for the week after breaking her spinnaker pole. V25 Query and V42 Penny battled all the way to the finish but Query prevailed with Betty in third.

A SW force 4 wind and glorious sunshine greeted the fleet. The first beat from Park to Calvert against the tide was again decisive, with the right-hand side paying off. V36 Melody led V18 Polly and V61 Betty around Calvert. V18 Polly overtook V36 Melody on the second beat and led to the finish.

Polly’s victory in race 5 gave her the week.

Points Week once again showed racing in the Harbour at its best with great race management, fabulous courses and big turnouts!