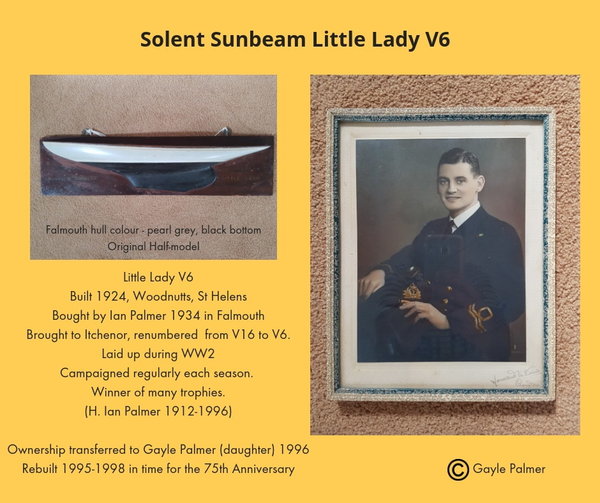 Built in 1924 for the Falmouth fleet and named Little Lady, she was originally numbered No. 16, although she was one of the first 6 boats in the fleet. She won the first season with her owner Capt. Wilcox.

It seems that he then became ill, and she had been hit at some point, as after a few notable seasons she was laid up in a mud berth in Falmouth Harbour and abandoned!

Having learnt to sail off the Itchenor Hard, as a young man H. Ian Palmer was looking for a stylish small yacht to bring home to Itchenor Sailing Club and along with others made a case for a Solent Sunbeam class to be established there in preference to a class for the Victory fleet. So, with family backing, she was purchased in 1934, a trailer was made and she was brought to Itchenor to be repaired and to race regularly, this time numbered V6, as Mystery was already numbered V16. I believe that Capt. Wilcox died a year or so after her purchase. Originally she was pearly grey on a black bottom. Ian repainted her bright yellow with a black coving stripe and black bottom.

Ian raced every weekend in the season, staying usually at the Club, and campaigned at Cowes and the many other Solent Regattas, winning plenty of prizes – possibly helped by an enormous oversized spinnaker and pole for handicap racing! He even had one notable season when he was completely unbeaten (even Roger Wickens has never managed that!).

He sailed her to Torbay for the 1934 Coronation Regatta celebrations (I think he won there too) and on the way home had to make an emergency dash into little Lulworth Cove to avoid a large, perilous storm. Apparently the local hotel sent out a boat to bring him and his crew to shore for the night.

Ian was a staunch supporter of the Club’s annual Regatta Day and especially the Haines Cup, which is a handicap pursuit race for all Club Members with a boat of 12 ft. and upwards in length. Even when he had retired from normal racing due to having a young family through his 70’s, he still competed (but with saggy sails and a scrubbed-off-the-beach-hull) and could often be found “pushing off” having gone aground (again). He took it upon himself to be the fleet’s vanguard for the faster boats arriving from behind – especially the Int 14’s – which then had large chines and blousy spinnakers! Finishes were at their most spectacular when they included a turning mark part of the way up to Birdham in the main fairway and when one had to cross the Club line, while avoiding oncoming racers! (It’s a shame that health and safety considerations meant that got it changed, as it really added to the drama!)

By the late 1990’s Little Lady had been a “beach boat” for Ian’s young family, and had missed out on annual maintenance for some years. Gayle Palmer, his daughter, then took on the large task of re-fitting her. This task was larger than initially anticipated and took 3 years! Newly fastened with a new deck and rudder, new spars and modern sails, she was “good as new” for the next 75 years. Her launch sail was to Cowes to join the fleet in time for the 75th celebrations!

Since then she has been raced regularly with some success and her colour has changed to yellow and royal blue. She has now been in the same family for 84 years and is really part of the Palmer family.