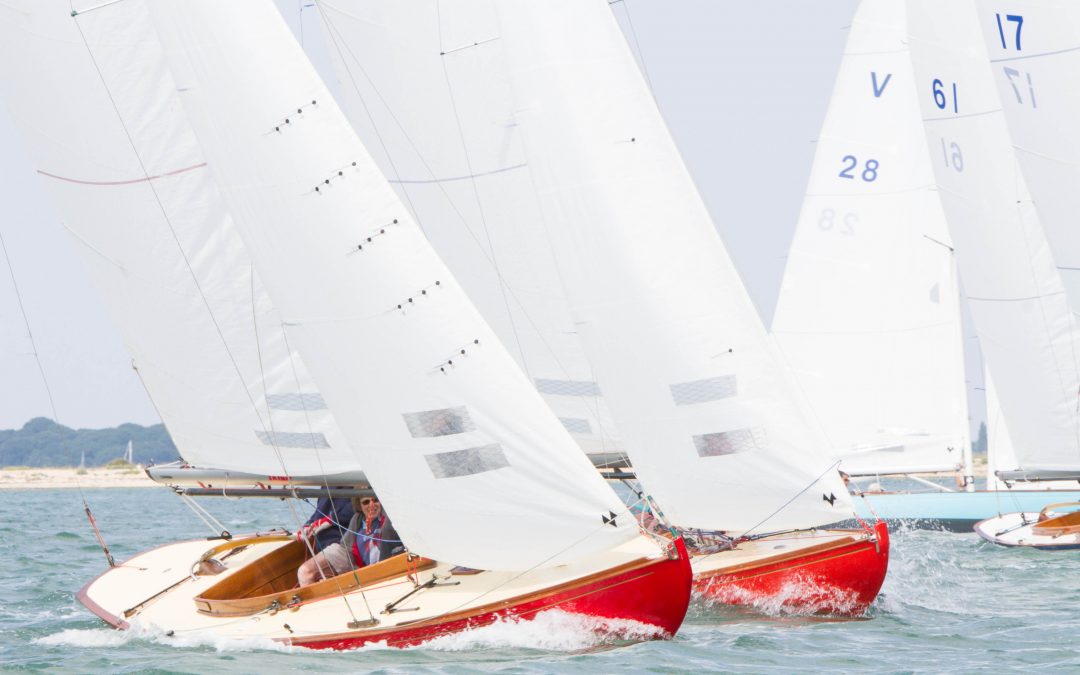 Tuesday morning greeted an eager Sunbeam fleet with a cloudy sky and a hint of rain to come.

Undeterred, 15 Sunbeams made their way to the start line just south of the Chalkdock bend with Betivuka stationed on the west side of the channel. The Swallows, who had started earlier, had mainly voted for the western shore, with a smaller contingent on the eastern side. With little other traffic and a good line on a flood tide, the Sunbeam fleet started first time and tacked up the western shore with the lead changing hands amongst several boats. A key decision point seemed to be at Pilsey beacon where those who took a long port tack closer to Thorney seemed to do better than those who went further south. Fate decreed that the port tack layline took some of the fleet through the HISC regatta starting line, but the first group of boats slipped across just after the 29er start and before the next batch of dinghies was unleashed. By this time, the wind had moved up a notch from 12 to 15 kts at the start to around 15 to 18 kts; the direction remaining fairly constant for the duration of the race somewhere between SW by S and SSW. Most of the leaders tacked onto starboard to start crossing the bank near the Mid Winner navigation mark; a few boats had taken an earlier nibble on stbd either to clear their wind or possibly to see if they could lee-bow the flood tide as it flowed east to west along the north side of the Winner bank, but this did not seem to pay. The waves were more noticeable on the bank, challenging the helms to find a good balance between height and speed. At Treloar, a strong bear-away followed by a spinnaker hoist in bumpy conditions kept the crews awake, to be followed by a broad reach down the waves towards Astra and into the fleets of dinghies heading for Calvert. A big thank you to the PRO for making this a starboard gybe leg, giving us some right of way over the approaching dinghy fleets.

As often seems to happen, the fleet had begun to split into groups; in the leading bunch, Emily had a very relaxed spinnaker hoist and slowly dropped back in the fleet to be swallowed up into the second group following a brief grounding on the beat back from Astra. Danny had decided to take advantage of the new 1m+ Covid rules and enjoy the company of the leading bunch chasing Fleury, although this was not to last up the next beat. The second group was headed up by Alchemy who were having a storming sail leading a hard-chasing pack; a position they managed to hold on to through to the finish. A gybe at Astra and then a long port leg followed, but the tide was on the turn, or at least thinking about it, which meant there was no need to avoid the main channels. Once again, the leading pack charged past the HISC start line ODM, this time just ahead of the start of the fast-asymmetric fleet, fortunately all poised at the other end below their committee boat. The majority again chose the middle of the Winner bank, this time with the added interest of the HISC fleets heading for Calvert and having to cross the line of starboard tack Sunbeams as they approached their buoy for a gybe-set spinnaker leg in a bumpy 18ish knots of breeze. We were probably not a welcome sight to a group of understandably apprehensive dinghy helms.

A second rounding of Treloar followed by a long run down against a slowly building tide to Park provided a traditional Itchenor finish to the race on the Gallon line. As if to order, the sun broke through the clouds in time to allow a relaxed lunch on the lawn, and general agreement that Wednesday was looking a bit too breezy to be fun and an early cancellation was sensible.

Wednesday morning arrived dark and wet with steady rain falling continuously. Fifty thousand* spiders peered out from their webs in garden sheds across West Sussex, realising that the convenient framework of the lawnmower was going to be disturbed in the next few days. Meanwhile, Sunbeamers still abed listened to the patter of rain on roof and windows and pulled their covers a bit higher. What a sensible decision to cancel the race yesterday and remove all feelings of guilt for this unexpected lie-in. Pity the poor dog owners. But where was the all-too-powerful wind? Were we all going to look like a bunch of fair-weather sailors afraid of getting our longer than normal hair wet? Fortunately, by 1130am Chimet was reporting 20 to 25 kts and a glass of wine with lunch seemed reasonable.

And so to Thursday. One race at 1210 starting after the Swallows and XODS with a harbour course promised, to take advantage of the 1315 high tide. Once again, the Sunbeam fleet was keen and out early. XODs were still racing but the Swallows were showing signs of finishing and were soon put into sequence. It appeared that some of our fleet felt that they should own this start since this was our scheduled start time, but the PRO politely cleared the line and the Swallows were away first time. However, the hint had been taken and we were next off, perhaps taking a few of the fleet by surprise until flag Victor appeared on Betivuka.

Betivuka was further down the channel than Tuesday, possibly a bit nearer Rookwood than Chalkdock and certainly further south than for Race 1. The line also appeared to be committee boat biased, with the wind from SSW. Starting at the boat end of the line meant that after a few tacks hugging the shore, the wide-open expanse to the east of the goalposts was available, and here it is usually possible to find clear air and little tide. This did not stop a strong contingent heading up the eastern side where it was possible to take long tacks on starboard until the helm’s nerve broke due to the depth reading, causing a quick leg on port out towards the channel. Danny was the first boat around the special windward mark near EH and had come up the Thorney side, but Query (sponsored for this and most races by a wool shop) led the charge from the left. And then a close reach to John’s Folly (just what did John do?), which would not support spinnakers. Rounding JF, the fleet mainly took a long port tack towards HISC, which meant a further enjoyable reunion with the 29er fleet, who were on stbd tack, but some distance from their start line and well spread out.

Beach was the next mark and the question was where to cross the Winner bank. Spectacular waves were being thrown up irregularly by the bank at its northern edge, just by the Mid Winner buoy. These were not regular long rollers, but a big surge of water breaking into foam and probably the remnants of the seas from Wednesday’s winds. Danny decided to throw prudence to the wind and sailed over the bank at this point. Roger was still drying himself off at the prize-giving, and for once, the fleet decided not to follow the leader. The wind was slowly dropping, catching out a few boats who didn’t change gear to take account of this and the slop over the bank. Dainty was a noticeable exception going quickly upwind and caught up with the leading group at this point. Beach was rounded to port and then a downwind leg back to JF. A sharp port rounding and then back to Beach with the tide now allegedly on the turn. Some boats tacked onto port early in an attempt to find the tidal lift off the western edge of East Head, but waves were breaking heavily on the beach in this area and this tactic did not seem to pay on this occasion. Once again, the fleet rounded Beach and headed for Park, where the finish was expected. Perhaps it was the change of tide, but the rollers were now really pronounced passing East Head, and the Sunbeams enjoyed a spot of big wave surfing prior to the long leg down the western edge of the channel to minimize the tide. The breeze was now below 10 kts and appeared to be ready to drop further.

On the run down, eagle-eyed crews would have noticed that the Swallows were returning up the channel and sure enough, approaching a noisy Betivuka, a change of course was signalled, adding a loop around Astra and back to finish at Park. This was particularly hard on V47 Kitty (on loan to Mike Creagh) who had had a problem with the spinnaker halyard. The kite had been hoisted on the jib halyard and then problems occurred re-hoisting the jib, leading to retirement and the loss of a top 5 finish. The wind remained steady on the leg to Astra and may even have slightly increased, possibly due to the start of the ebb. A few long boards across the channel quickly took the fleet to the buoy, where some of us were able to sail in convoy with the XODs during the run back to Park. A run provides opportunities for overtaking, particularly when against the tide, and Danny and Fleury took the opportunity for a little match racing in this final leg, with Danny just taking the win and on countback, the Chisholm Trophy.

Overall results are at https://www.itchenorsc.co.uk/keelboat-week/sunbeam-results.

Our thanks are due to the race team, support boat crews and also to Tony Glover, who was responsible for the overall smooth running of the event, despite the upsets caused by a typical English summer.

*Please note that this number has not been independently verified