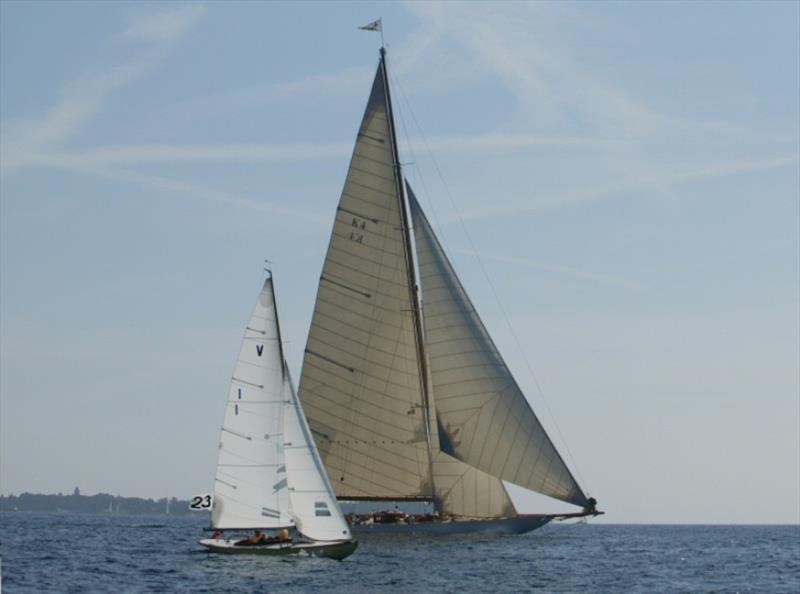 Image: Dainty and Cambria at Cannes

Bosham-based Peter Nicholson, owner of Solent Sunbeam ‘Dainty’ hull no. 1, sets off for the annual Regates Royales and Voiles de St Tropez regattas in the South of France

What started 15 years ago as an unusual and challenging adventure, has become not only an annual event, but one that has created life-enhancing memories, incredible sailing experiences, lifelong friendships, prestigious awards and a few headaches along the way!

Regates Royales takes place in Cannes each September, and is hosted by the City of Cannes and organised by the Yacht Club de Cannes. The event sees the gathering of around 150 of the world’s greatest classic yachts, including a number of ‘grand dames’ such as Elena of London, Cambria, Sunshine, Moonbeam and Mariska often gracing the bay. The event guarantees tight, competitive racing on the water followed by the friendliest of evening soirees ashore as the yachts moor alongside each other on quay in the old port!

According to the rules, yachts under 10m were not strictly allowed to participate but the event organisers were so taken with commitment and loyalty of keelboats such as Dainty (as well their delightful lines) that they created a ‘Classe Invité’ so they could continue to compete! Being so small, at just 8.2m, means that Dainty is one of the few yachts taking part that has no engine. This makes for nerve-wrecking mooring manoeuvres when trying to reverse into her berth in the old port in Cannes, but always elicits great admiration from the neighbouring yachts and on-shore crowd!

Getting a 96-year-old classic keelboat plus its skipper, crew and shore-team is a military operation which takes planning and commitment, not to mention people and financial resources! Each year the yacht visits Haines Boatyard in Itchenor for maintenance and restoration. The trip down to the South of France is taken at a leisurely pace allowing time to enjoy the food and wine on the way!

As you would expect from 15 years of towing a classic yacht from Itchenor to the South of France, its not always been plain sailing. A blown head gasket one year necessitated a hasty trip back to the UK to purchase a new car in order to complete the yacht’s trip down to the Mediterranean!

Once the racing is completed at Cannes, the classic fleet sets sail for St Tropez in the annual Yacht Club de France Coupe d’Automne (Autumn Cup). This 30-mile race along the stunning Cote D’Azur coastline can sometimes be interrupted by the famous Mistral wind which sees fresh north westerlies blowing off the land into the Gulf of Lion, sometimes reaching 40+ mph!

Once again in St Tropez the classic yachts all moor together to continue their partying and the admiring comments from the steady stream of passers-by on the dockside!

Voiles de Saint-Tropez is a huge event attracting both classic yachts and the latest modern racing yachts with over 300 yachts taking part and in excess of 4000 sailors and supporters. Peter notes that St Tropez with its magical location and stunning racing makes the perfect setting for the end to his sailing season.

Peter, owner of Solent Sunbeam Dainty hull no. 1, which was built in 1923, notes that ‘it’s not about the winning at these events, it’s all about the taking part!’. The atmosphere and camaraderie are what bring him and his 96-year-old Sunbeam, Dainty back year after year!

If you are interested in owning a piece of yachting heritage that also has a very active racing fleet, then the class has a number of boats available for sale or part ownership, with more details available on this website.