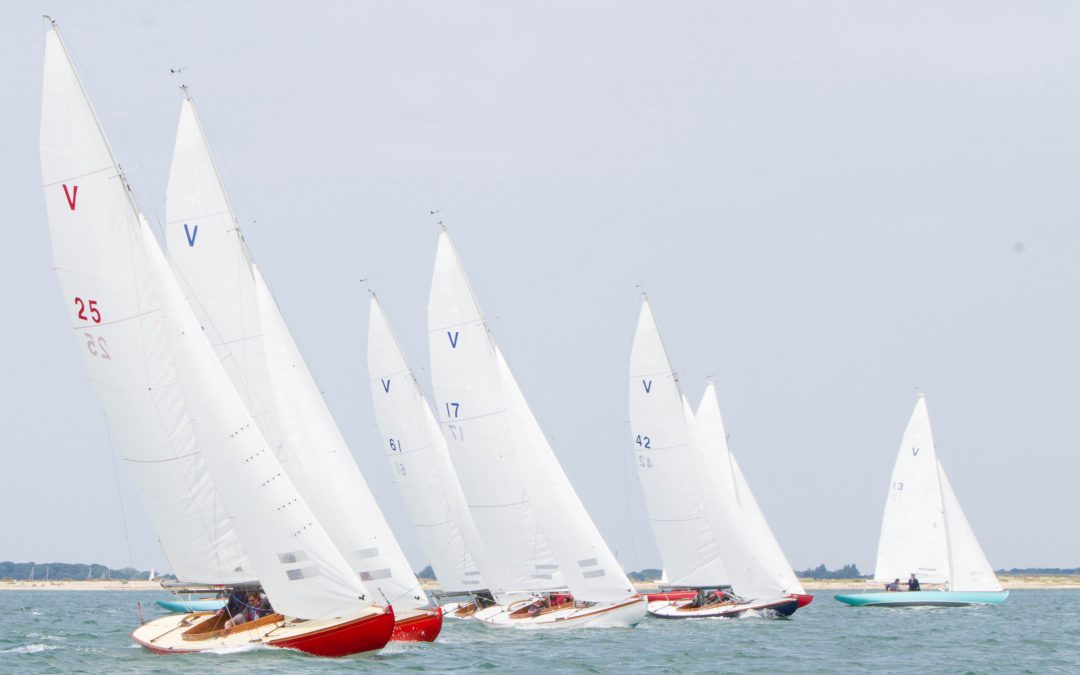 The Solent Sunbeam fleet racing at Itchenor Sailing Club had superb racing conditions for the Chittagong Cup race series over the May Bank Holiday weekend. 20 Sunbeams raced in moderate wind conditions and the closeness of the racing meant that the final results went down to the wire!

In the first race Joe Burnie in V41 Fleury got away on the first beat to Dunes. Whilst the majority of the fleet chose to sail up the East Head side of the beat to keep out of the adverse tide, Tim Hill in V25 Query and Tamsin Saunders in V12 Argosy chose the right-hand side of the course. This paid dividends, with Query and Argosy rounding the windward mark in second and third place. Mike Weston in V14 Jabberwocky raced through to second place on the downwind leg, with Query finishing third.

In the second race the fleet were well spread along the start line, but as the fleet approached East Head, they met another fleet of keelboats which resulted in over 30 boats rounding the mark at the same time! Fortunately, little damage was done but in the excitement Roger Wickens in V26 Danny sped away in the lead. Danny maintained her lead for the rest of the race which turned out relatively uneventful! Julian Money in V42 Penny and Jabberwocky were second and third respectively.

Day two of the series also provided moderate winds. In race 3, Danny didn’t have the best race after having to do a penalty turn. Fleury once again raced off into the lead and crossed the line first, followed by Peter Taylor in V61 Betty and Query. With all to play for in the final race, Danny secured the victory, but with Duncan O’Kelly in V11 Harmony in second place, Fleury only needed to cross the line in third to win the series.

Fleury did finish third so clinched the series win by one point from Danny and Jabberwocky in third place.

The origins of this event date back to the early 1990’s when the then Class Captain, Kirk Webster, presented the cup to the fleet. Kirk had acquired the silverware from another owner, Kenneth Bailey, whose father had been given the trophy to mark his retirement from the Chittagong Railway in Bangladesh. So, although not originally connected with sailing, the name has become synonymous with this active and hugely competitive classic fleet of keelboats.