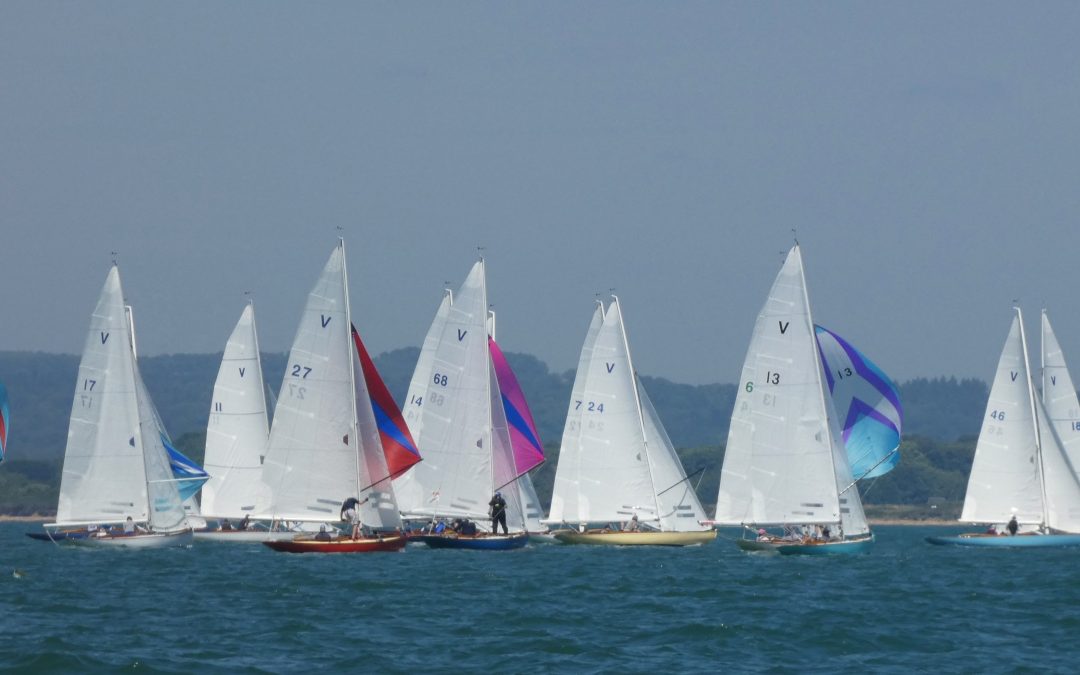 A large fleet of 22 Solent Sunbeams enjoyed glorious sunny conditions for Itchenor Sailing Club’s Keelboat Week held from June 13-17. The racing was incredibly close with 4 boats still with a chance of winning the regatta with one race to go.

On day 1 Holly led the fleet round the course until the final run to the finish.  Danny managed to get inshore of Fleury and as Danny sailed up to Holly’s transom, Holly gybed quickly followed by Danny. Unfortunately for Danny, their rigging touched Holly so Danny did an immediate 360 degree penalty turn. In the melee , Fleury managed to take the lead and Polly also gained on Holly and rounded Park on the inside of Holly. After rounding Park, out of the leading boats, only Betty and Danny chose the north shore to the finish. That gave V14 Jabberwocky the opportunity to make gains and she finished fifth behind Fleury, Polly, Holly and Sky.

Day 2 saw Chichester Harbour making a very good impression of a Mediterranean harbour with cloudless skies and light winds. On a day of snakes and ladders the south-easterly wind shifting in both direction and strength made for a particularly tricky race on both the first and final legs. Some boats were particularly cautious at the start and Danny, Polly and Query were the last to cross the start line having been caught out by a lack of wind at the pin end.

Fleury got the best start at the pin end and was well ahead at the windward mark followed by Holly and Jabberwocky. Meanwhile, Danny was somewhere in the teens and Polly was acting as afterguard to the fleet.

Things got very interesting again on the final run to the finish.  Holly and Jabberwocky rounded Park in first and second but shortly after the wind eased. As Fleury and then Danny passed Park they were hit by a stronger band of wind and they both gained on the leaders. Danny headed towards the Itchenor shore on a close reach in a south easterly wind whilst Holly and Jabberwocky short-tacked up the northern shore in an easterly wind.

After 2 hours of racing congratulations must go to driver of the day Roger Wickens in  Danny for pipping Holly at the finish, especially surprising given that Danny was 18th boat to pass through the start line! Falmouth Sunbeam visitors (Paul Pullen and Timmy Bailey) also had a good day having got to grips with Fay and finishing fifth. Holly held off Jabberwocky for second and Fleury was fourth.

On day 3, after a short first beat, the leading group proceeded to sail high in an attempt to both take and clear their wind. What the leading group failed to realise, being so engrossed in their bun fight, was that they had mistaken South West Pilsey for Freddie Brooks and an immediate righthand turn was required to head for the correct mark. Several boats benefited from this error and Polly, Honey and Betty gained places by being able to take a more direct route to Freddie Brooks.  Polly held her lead to the end and Fleury worked their way through to second followed by Danny.

The wind failed to materialise at all on Thursday so racing was abandoned. With one race to go Fleury, Polly, Danny and Holly still had a chance of winning the week.

Day 5 provided the strongest winds of the week with a 12-14 knot south-westerly. The choice of direction on the first beat was crucial. Out of the four leading boats overall, only Polly headed for the eastern shore but at the windward mark Holly led Danny and Betty. The final run was again very close with nothing between the first 4 boats who spread themselves laterally across the run with Danny to the right, Holly taking the direct line followed by Betty and Fleury the furthest left boat. Danny out in what appeared to be the main ebb crossed the finish line first, followed very closely by Fleury on the left and Holly in the middle, with Betty just holding off Harmony toward the committee boat end of the line.

By winning the final race, Danny was tied on points with Fleury but won the Week as a result of their two first places. Holly was third overall, three points behind and Jabberwocky pipped Polly for fourth place overall by one point. 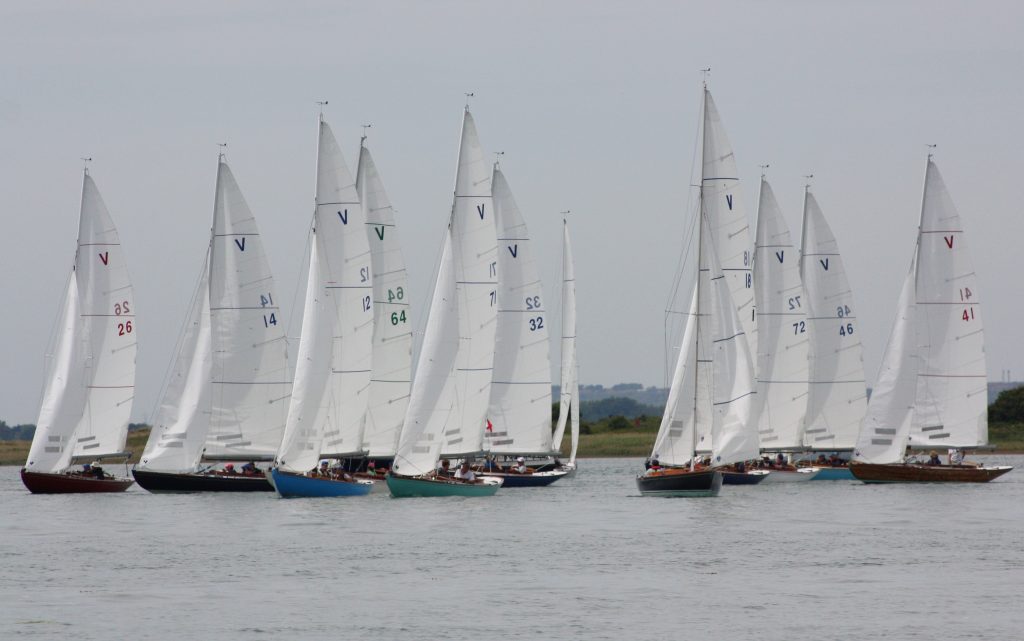 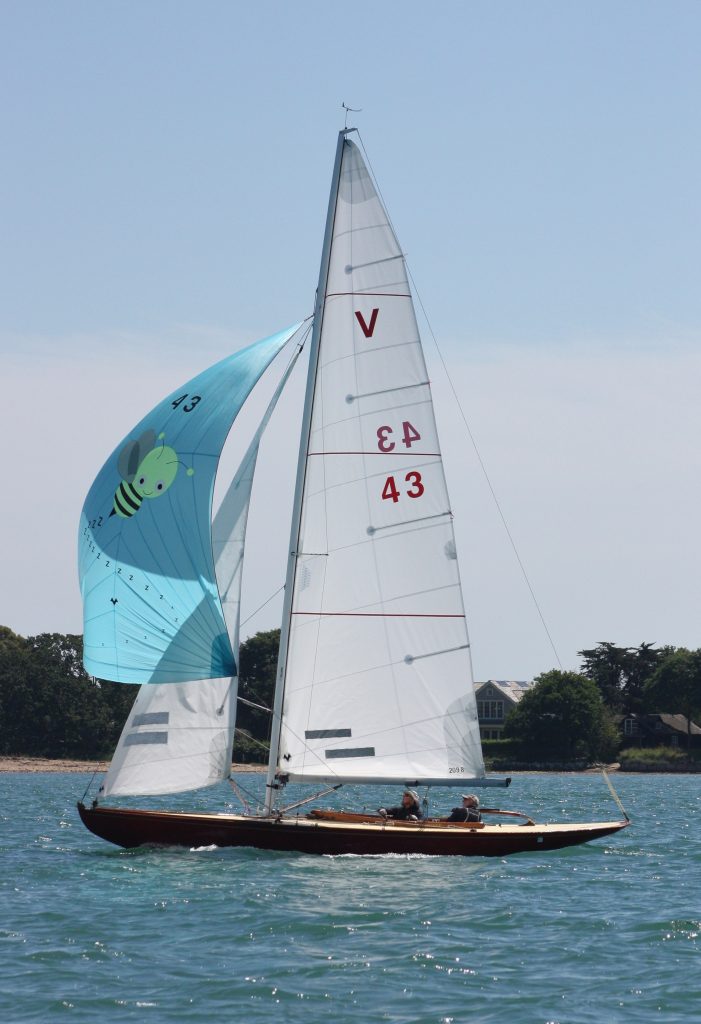