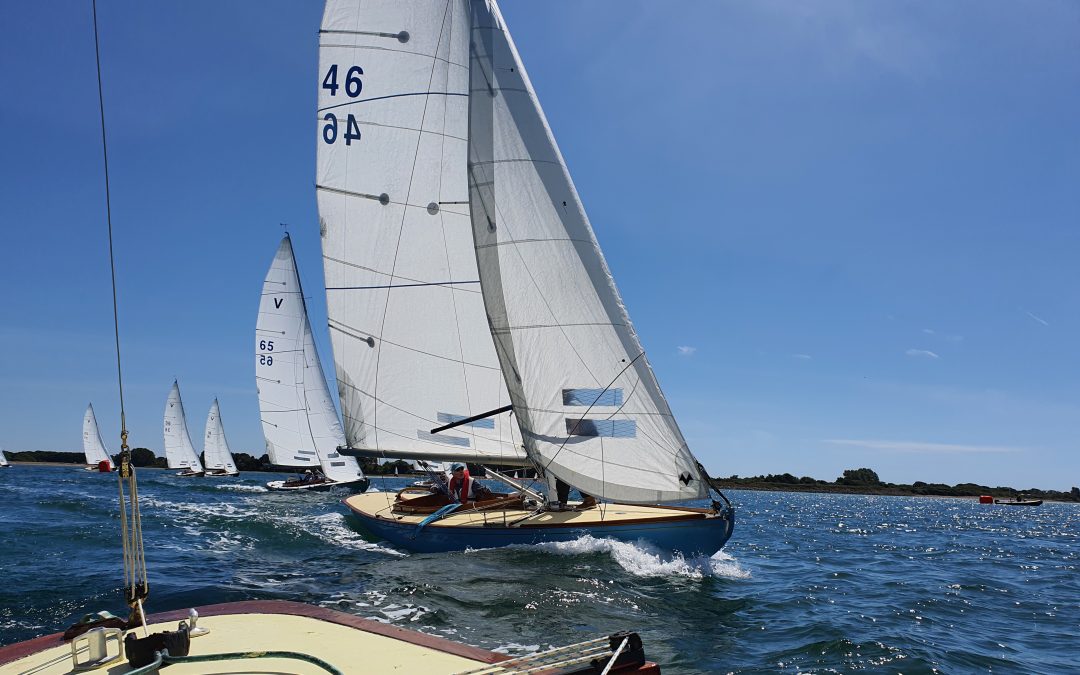 The historic Solent Sunbeam fleet, which boasts 97-year-old wooden keelboats through to brand-new GRP hulls, has experienced one of its best sailing seasons despite the shadow of Covid-19 and a late start to the season. The fleet has enjoyed some of its largest ever turnouts at its Covid-secure racing events as well as the extra bonus of new family groups spending quality time together on Chichester Harbour.

As soon as the lockdown rules started easing in early June, a number of enthusiastic Sunbeam owners took part in the test races put on by Itchenor Sailing Club, with 10 Sunbeams crossing the line at the first event. At the time all crews had to be from single households so it was agreed that no spinnakers would be flown to accommodate some of the less experienced teams.

The class were also able to re-start their Thursday evening informal racing programme and enjoy the natural beauty and serenity of Chichester Harbour; although the post-racing socials had to be avoided.

One of the outcomes of the coronavirus lockdown was the enthusiasm of owners to get out on the water when the rules were initially relaxed to allow ‘single-household‘ sailing. This resulted in new family pairings enjoying the peaceful waters of the harbour and the close but friendly racing in these historic and timeless keelboats.

By July, the season was fully underway with new guidelines, including mixed households and socially distanced sailing, and the Sunbeams experienced some of their biggest number of entrants for their re-scheduled Chittagong Cup. With excellent weather, sunshine and blue skies, the 19 boats enjoyed Chichester Harbour racing at its best with steady winds, challenging tides and very tight competition. The series was won by V41, Fleury with V26 Danny in second place.

August saw the rescheduled Chisholm Trophy regatta attract 20 Sunbeams in what turned out to be a two day event due to strong winds cancelling racing on the middle day. The newly named Itchenor Keelboat Week (formerly Points Week) was held in September, rather than its customary June date. 20 Sunbeams competed in what started as a light wind event but ended with a cancelled final day due to the strong wind forecast. Extremely tight racing on the water was reflected in very close final scores with V41 Fleury winning the regatta on 5 points, the 97-year-old, V1 Dainty, runner up just two points adrift and 3 boats tying for 3rd place!

A new Class Captain was voted in during the summer with Ollie Gilchrist taking up the mantel for the next three years. Ollie lives locally in West Sussex and has sailed from Itchenor since childhood.

As the season comes to an end the fleet is looking to the future and in particular the fast approaching centenary in 2023. With this in mind, the class association is keen to update the history and ownership of each of these classic boats with a view to publishing a new book for the 100th celebrations. The class association would like to hear from anyone who has owned a Sunbeam, past or present, or just sailed a Sunbeam; photos, images, anecdotes and stories can be sent to info@solentsubeam.co.uk

Over 30 Solent Sunbeams regularly sail from Itchenor ranging from 97 years in age to brand new, low-maintenance GRP yachts. The class is extremely welcoming and sociable with very supportive owners who have a common passion for the design, heritage and sportsmanship of the fleet.

If you are interested in owning a piece of yachting heritage that also has a very active racing fleet, then the class has a number of boats available for sale or part ownership, with more details available on the Solent Sunbeam website. www.solentsunbeam.co.uk