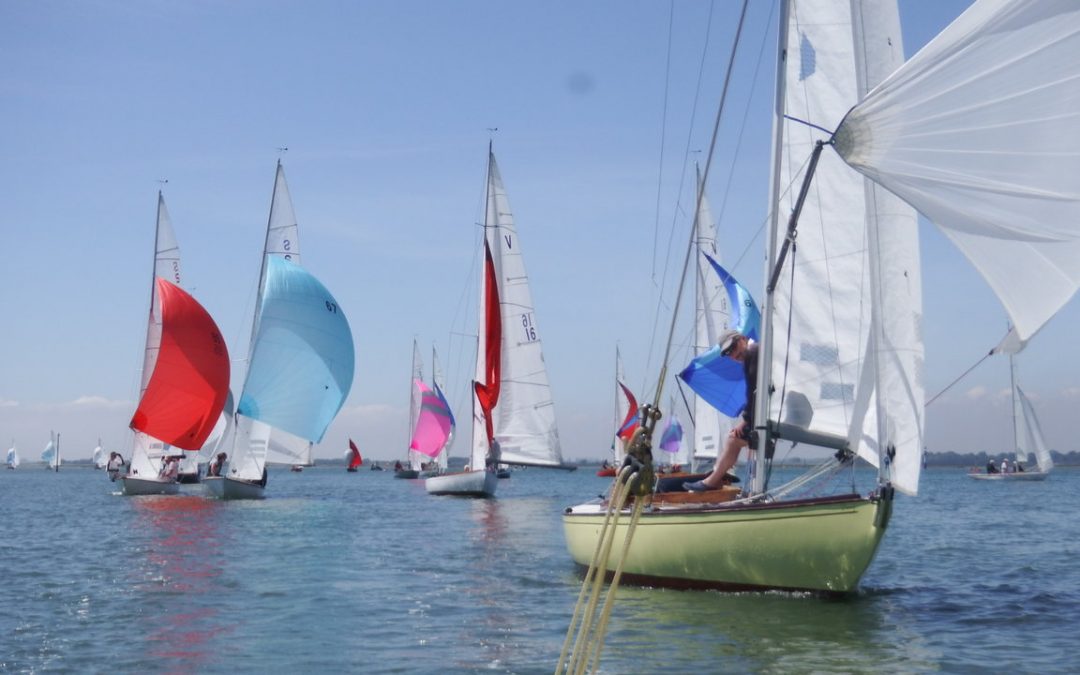 Over the bank holiday weekend (26-27 May), 19 Sunbeams enjoyed excellent sailing conditions in Chichester Harbour at a special 95th anniversary regatta. The class was designed by the eminent designer, Alfred Westmacott, in 1922. The longevity of the class meant that the competing Sunbeams aged between 1 and 95 years old!

The first day of competition starting in cloudless skies and moderate 15-knot breezes which increased to 20 knots during the course of the day. In the first race, Julian Money sailing V42 Penny raced into an early lead followed by Roger Wickens in V26 Danny. Danny, however, forged ahead. Behind Penny, Tim Hill in V25 Query pipped V68 Sky on the finish line for third place.

In the second race there was some close racing between Danny and V18 Polly sailed by Nick Leach. These two had a good lead over the chasing pack and they finished first and second respectively.

The second day dawned windless but after some delay a light breeze emerged. With the tide ebbing this put a premium on fast downwind sailing and the marks consequently became fiercely contested. Danny led from the first mark followed closely by Polly and these two maintained their positions until the end. Unfortunately for Polly she was disqualified for being over the line at the start, giving second place to Penny.

With three first places, Roger Wickens in Danny secured the regatta victory with one race to spare. In the final race, Query and V14 Jabberwocky, sailed by Mike Weston, led from the first mark and kept their positions until the end. Behind them, Danny and Polly had another close tussle but Danny prevailed in the end.

After racing on the final day, 95 Sunbeamers celebrated the Class’ 95th anniversary with a special dinner at Itchenor Sailing Club, where the Class sat down to a sumptuous meal followed by dancing the night away.