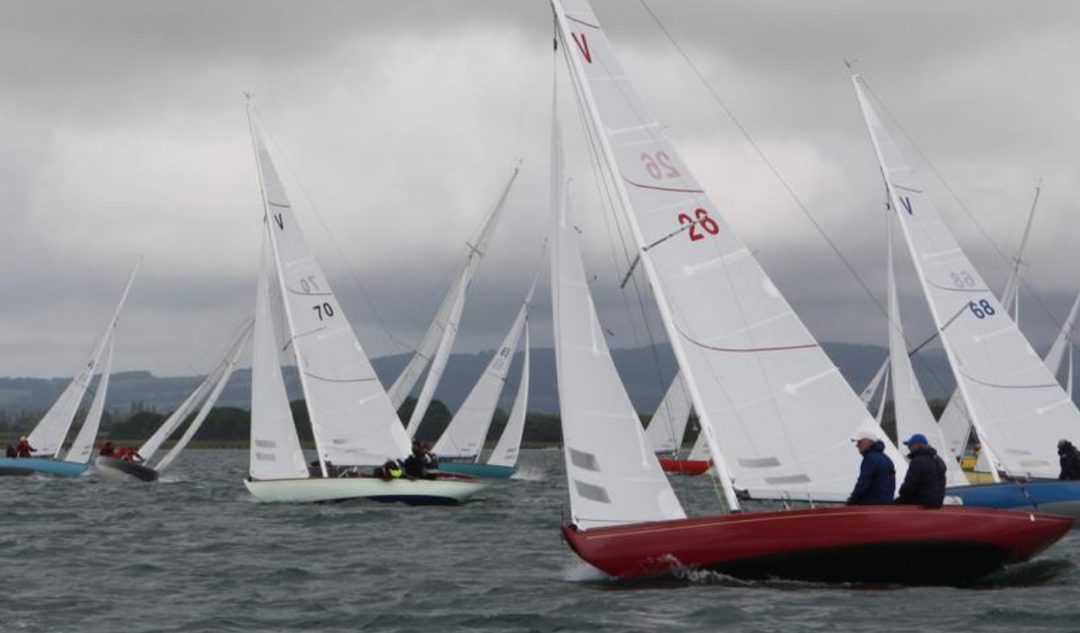 Prior to the start of the race for the ‘Dainty Dish’ on the 4th July 2021, the owner of the first Sunbeam V1 Dainty, Peter Nicholson, was presented with a glass bowl to commemorate the fiftieth running of the annual passage race from Itchenor to Cowes which started in 1971. At the presentation, Peter told the fleet that since that first race he had subsequently competed in at least 45 of them! He also reminded the competitors that although it is a long passage race, it often provides memorable twists leaving the outcome in doubt until the very end.

At the start, the Solent Sunbeam fleet were aided by an ebb tide which, combined with a blustery South-South-West wind, provided some very exciting bumpy sailing beating out of Chichester Harbour. At the effective first windward mark at NE Winner, the fleet was led by the recently-launched V71 Tiffany, helmed by visiting Cornish Falmouth Sunbeam sailor, Phil Badger, and crewed by its owner David Grylls. This was despite both having only sailed in the harbour a few times before. The 24-strong fleet was a great spectacle for those watching from Hayling Island as the fleet tacked past the Sailing Club. One crew reported seeing the bottom of another Sunbeam’s keel as they rode over some very steep waves on exiting the Harbour. V11 Harmony coped best with the choppy conditions and led the fleet at West Pole from V70 Minty and V26 Danny.

Once the fleet had rounded West Pole, there remained a long close reach to Cowes in very pleasant conditions. As the fleet approached the forts, V12 Argosy was the first to hoist their spinnaker, quickly followed by the rest.
Towards the rear of the fleet, V18 Polly led the boats who chose to sail a straight line from Horse Sand Fort to Cowes, whereas the majority chose to sail a more southerly route closer to Ryde Pier in anticipation of dodging the adverse tide later on. However, with the favourable breeze the fleet made such quick progress to Cowes that the tide played no part in the race. A small and select group of boats had tried to tide cheat in towards Wooton Creek, led by V26 Danny, but for once this scenic detour did not pay dividends. V32 Holly (formerly called ‘Romany’), sailed by her new owners Martin & Vicky Jones in their first race, chose to stay offshore where there was more wind and they took the lead. They were followed by V12 Argosy which was on loan to Paul Pullen, Timmy Bailey and Ed Bolitho from the Falmouth Sunbeam fleet. Further offshore, V47 Kitty and V6 Little Lady had a strong finish navigating very effectively through the usual wind hole around Old Castle Point. Further to the north, V62 Firefly overtook V18 Polly when a ship went past.

Congratulations must go to Martin & Vicky Jones sailing V32 Holly in their newly acquired 94-year-old boat as they were first over the finish line. However, following the twist promised by Peter Nicholson before the race, the first four boats – V32, V47, V62 and V12 – sailed to the finish line through some moorings prohibited by the Sailing Instructions which led to their unfortunate retirement. This gave victory to V18 Polly, sailed by Nick Leach and Martin Evans, with V66 Molly and V64 Maisy in second and third places. The winner later reported back that it had been 25 years since his first Dainty Dish race and the first time he had made the best tactical choices!