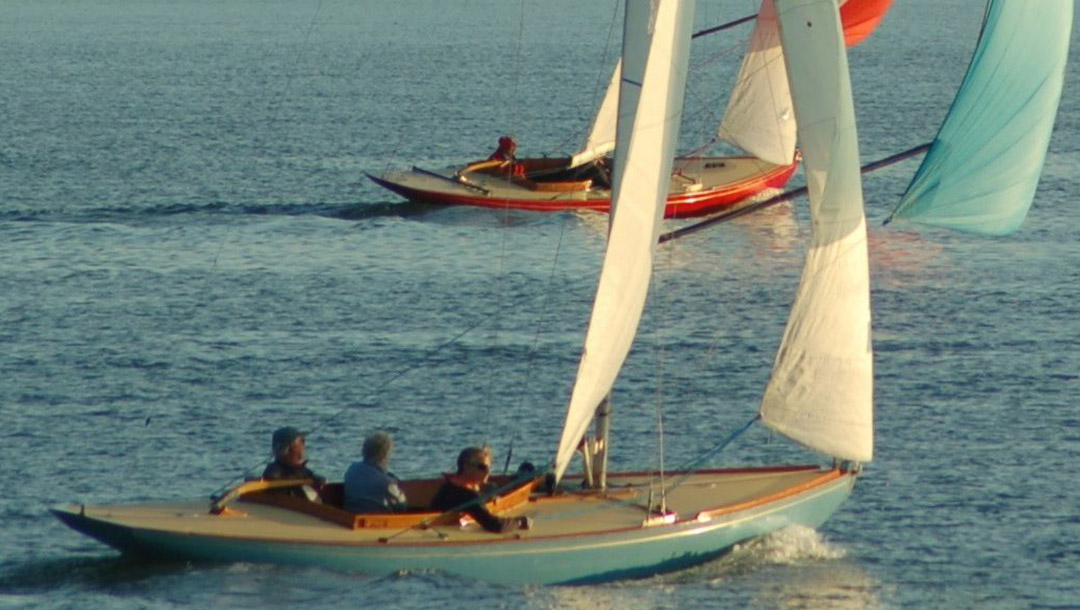 About the Solent Sunbeam

This pretty, classic, two or three-man keelboat which was designed by Alfred Westmacott in 1923 has been continuously sailing in the Solent for 95 years and has its base at Itchenor Sailing Club. The very first Sunbeam – Dainty, No. 1 – is still actively raced today as are several boats that were built in the early 1920’s.

A traditionally trained naval architect from the Victorian era, Westmacott responded to a commission from three Hamble-based yachtsmen to design a racing dayboat by producing a boat that was not only pretty but one that could handle the boisterous conditions of the Solent. Read more about our history.

32 Sunbeams sail from Itchenor ranging from 95 years of age to new all-GRP and newly epoxied yachts, yet all racing on level terms in a one-design fleet. Regular racing is highly competitive with no restrictions for tides on most weekends and Thursday evenings from March to October.

Click here to view the major events in the Sunbeam calendar in 2018 as well as the calendar of regular racing.

‘The boats are awesome – the class’s best asset is that in light airs it is just amazing. Sunbeams behave as a boat should’ (Julian Hawe, yacht skipper and Sunbeam crew).

‘Sunbeams ghost in zephyrs, sparkle in a breeze and exhilarate in a near gale’ (Roger Wickens, winner of many races).

Local class rules have evolved but not to the extent that wooden boats from the two fleets cannot still race against each other. Click here to visit the website of the Falmouth fleet.

During the long life of the Sunbeam, there have been a good many changes in the names of the boats, and a number of transfers of boats between the Solent and Falmouth Fleets. The two Classes maintain close and friendly relations with one another. Team racing between the two Fleets is an annual event with the venue alternating between Itchenor and Falmouth.

Many of the boats in both fleets have in recent years been completely refitted.

A Sunbeam requires careful tuning to achieve optimum performance. It is a challenging boat to sail well, especially in tidal waters, but it handles very precisely and has scintillating upwind performance, especially in light to medium weather.

No electronic navigational aids are permitted, which increases the dependency on raw feel and racing nous. But that’s the way Sunbeam sailors like it.

Information on how best to tune your boat can be found on the tuning tips page.

The enduring nature of the Solent Sunbeam is summed up by a long-time owner, Mike Williamson: ‘Helming a Sunbeam is serendipity. You leave all your problems ashore, and surrender to the sensuous joy of reacting to what she tells you.’

Come and try out a Sunbeam

If you’d like to be kept abreast of our news, subscribe to our email newsletter. We’ll send out occasional news about what we’re up to.

We will never share your email address with third parties. Read our Privacy Notice for further info.